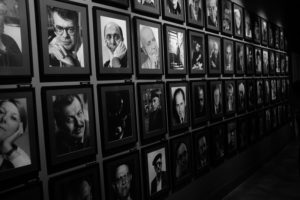 Poetry has always been a part of our history; from the start of civilization up to our modern era, it has always been embedded in our culture. But what was our writing like at a time of generation defining moments, a time when three wars, deadly pandemics and space exploration existed?

Poetry In The 20th Century

The 20th Century saw a more different style of writing, with poets opting for short and experimental forms to combat the notion that poetry should be elegant and lengthy. With this came the Modernist era, and eventually the Postmodern era of poetry. It also came with the rise of the beat poets and spoken word, a type of poetry meant to be performed.

This era saw a lot of changes to the structure and style of poetry’s past, as the 20th century writers made their works more concise and stylistic. But who were the most recognizable poets of the 20th century?

Prolific Poets Of The 20th Century

You may have seen some of these names and faces at thrift stores or antique shops – in faded, worn-out photographs. In fact, there may have been some who are hobbyists or collectors who are looking to restore old photos or preserve them properly.

Services such as the Image Restoration Center are a good start in turning a damaged photograph of, let’s say, T.S. Eliot, to its original form!

Cummings was most notable for his experimental style, particularly in the way he formatted his writing: usually in lowercase, grammatical linguistic flourishes that ‘broke’ the conventional rules of poetry, often putting new lines on his poems as if the words were scattered across the page.

He is heralded by literary critics as an avant-garde and innovative writer, his most notable works include ‘i carry your heart with me(i carry it in’ and ‘somewhere i have never travelled,gladly beyond’.

Langston Hughes was one of the central figures during the Harlem Renaissance of the 1920’s. Most, if not all of his writing was centered around the lives and challenges of the black community at that time, particularly the lives of working class black people. Though not without his critics, Hughes is considered to be one of the most influential black poets of the 20th Century. Among his works were ‘I look at the world’ and ‘Out of Work’.

Known for being a civil rights activist and working with the revolutionary Martin Luther King Jr. and Malcolm X, Maya Angelou was also a writer and poet. Angelou joined the Harlem Writers Guild in the late 1950’s, which spurred her to join the civil rights movement.

Though she has written poems such as ‘Still I Rise’ and ‘Phenomenal Woman’ Angelou is famous for her autobiography, ‘I Know Why The Caged Bird Sings’, in which she recalls her life in St. Louis and Arkansas, living with her brother and paternal grandmother. The book, then, was nominated for a National Book Award.

Chilean poet Pablo Neruda was regarded as “one of the most read-about poets of the 20th Century”, and was heralded as one of the greatest poets who wrote in the Spanish language. Neruda’s work consisted mostly of love poems, though he also delved into political themes, describing how Communism helped him in his despair.

‘Hunger in the South’ as well as ‘Ode to a Large Tuna in the Market’ were some of his most well-known works, with ‘Canto general’ as his most known work that was political in nature. Neruda was awarded the Nobel Prize for literature for his mastery in writing.

Though her life tragically ended at the age of 30, Plath is remembered as an astonishing writer, whose works focused on the dark and the taboo. Her works were deeply personal and devastating; telling her story of anguish, depression, and turmoil through poetry. A recognizable motif in her writing was her feelings towards her troubling marriage with fellow poet Ted Hughes.

Though she was known for her book The Bell Jar, her skills as a poet are not overlooked, having written pieces like ‘Strumpet Song’ and ‘On the Difficulty of Conjuring Up a Dryad’. Another one of her famous works was ‘Daddy’, about her tumultuous and difficult relationship with her father.

Considered to be a prolific writer during the 1870’s to the early 1900’s, Hardy’s work was mostly of history and existentialism, often writing about life in a bleak, pessimistic sort-of manner. This may have been attributed to the fact that he has lived through World War I.

One of his most impressive feats was publishing over a thousand poems in his lifetime, some of which were ‘ ‘In Time of ‘The Breaking of Nations’ ‘ and ‘And There Was A Great Calm’.

The 20th Century was a time for experimentation in style, and we have carried that innovation up until now. Many poets now do spoken word poetry, unconventional writing techniques are now regarded as a legitimate form of writing.

Poetry has come a long way – not just in terms of theme, but in style and even in form as well. From simply writing about love or telling a fictional story, many writers explored socio-political issues, their mental state, and even the meaning of life through poetry.

9 Awesome Reasons For Taking A Cruise This Year

Ready To Expand? 3 Places To Look For Business Investment