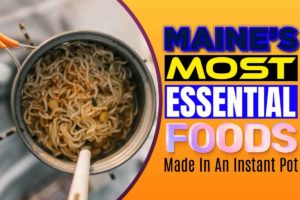 Beautiful Maine is home to millions of acres of forest land and enjoys having just 43 per square mile. At nearly 31,000 square miles, Maine is the largest of the New England states and supplies seafood and fruit to the rest of the country.

Not only does the state have a comfortable climate and beautiful scenery, but it is also home to some fantastic food. Of course, the one thing that immediately comes to mind when anyone thinks of Maine is lobster.

Maine supplies around 90% of all the lobsters consumed in the United States. A staggering figure until you understand the waters off the coast of Maine. Simply put, the conditions are ideal for creating the most perfect, sweetest lobster you can get.

The state also allegedly invented the Italian sandwich. Despite the name, Italian sandwiches were first made in Portland by Giovanni Amato, an Italian immigrant. With all this food being eaten, it can sometimes be difficult to not gain a few pounds. With this in mind, Maybe it is worth looking to see if there are different cooking methods to reduce the fat and calorie count.

Could a multi-cooker such as the Instant Pot help recreate some of Maine’s classic dishes?

What Is An Instant Pot?

For the uninitiated, the Instant Pot is a multi-cooker. That means that it has several cooking modes, including the following:

This appliance cooks at a very high temperature and uses steam to produce food that tends to be more moist and juicy than something cooked in a regular oven. They are also useful for slow cooking and can be set to come on at a preset time.

One of the appeals of the Instant Pot is that because they cook with steam, they tend to produce dishes that are lower in fat than other cooking methods such as frying. Also, all the ingredients can be added to the pot and it then gets on with the cooking process without any input from the cook themselves.

Could An Instant Pot Be Used To Create Some Maine Classics?

The Instant Pot can cook a wide range of dishes from cakes to frozen chicken, but it stumbles in some areas. Its saute feature leaves some users underwhelmed, and you would need some attachments to reach desired effects such as frying.

It can cook vegetables, meat, and many dishes including pizza, and cakes, though. So, it may well be able to tackle some of the things that help to make up Maine’s cuisine.

Because it uses less or no oil during the cooking process, the food could be deemed to be more healthy than baked, fried, or roasted food. Of course, what ingredients you use will also affect it.

If you find that you are living an unhealthy lifestyle then you can make a change now, and easily by changing your cooking methods. This could mean being able to still enjoy some of Maine’s less healthy options but from an Instant Pot.

What Is Maine Famous For?

You know full well that Maine is famous for Lobster, and especially lobster rolls. You now know that Italian sandwiches come from Portland originally but you might not be aware of some other foods and dishes that come from the Pine Tree State.

Fiddlehead ferns are something that is very, very, Maine. These delicious plants grow in Spring and will be harvested and eaten in Maine at that time of the year. Chowder has long been a staple dish in Maine, and other food associated with the state includes ployes, blueberries, and bean hole beans.

Now, it is time to see whether the Instant Pot can make any Maine dish, and importantly, can it do it well?

You might be wondering, why apple chips? You may especially be wondering this if you already know that apples aren’t even native to Maine, or indeed, New England as a whole.

However, there has long been a tradition of apple picking in New England. There are many lush and beautiful apple orchards across the state of Maine, so it seems fitting to have at least one apple recipe in the article.

There are plenty of reasons to make apple chips if you have been picking and have an abundance of the fruit. One excellent reason to try these is that they are far healthier than snacking on potato chips.

The only problem with using the Instant Pot for this recipe from Corrie Cooks, is that it requires the air fryer attachment. If you are fortuitous enough to have one of these then the rest is easy.

There are only 3 ingredients: Apple sliced thinly, cinnamon, and salt.

Combine all in a bowl and then transfer to the Instant Pot. Set the air fryer to 390F for about 8 minutes. Flip the slices and cook for another 8 minutes at 390F. Job done.

How About Some Chowder?

The Instant Pot can happily tackle your favorite chowder recipe. One reason that so many potatoes were grown in Maine in the past was to make sure there were enough to be included in all the chowder being consumed.

Cod is back on the dinner tables now and is perfect for chowder. However, just use your favorite recipe along with an Instant Pot.

You will need to saute all the vegetables – except corn – along with any herbs and seasoning. Then add flour and cook for a further minute. It is now time to add water and clam juice if you are using it.

Pressure cook the ingredients for a further 6 minutes and quick release to let out the steam. You will need a hand blender so that you can blend the soup while in the pot.

Now add in the fish of your choice, parsley, and corn. Saute for 2 minutes or until the fish is done.

Maine supplies more of the blueberries that are consumed in the US than any other state. Around 10% of the US’s blueberry supply comes from Maine.

There are plenty of good reasons to eat blueberries too, and not just because they taste good. According to Healthline, there are many health benefits to consuming blueberries including their antioxidant properties.

Blueberry pie may be Maine’s official state dish, but blueberry cake is extremely popular too. However, Instant Pot cake might not be to everyone’s taste.

There are plenty of recipes for Instant Pot blueberry cake on the net, but you should be aware that there are no real time-saving benefits. Normally the Instant Pot would cook quicker but not with cake it seems. Also, the texture will not necessarily be what you are looking for.

Perhaps Maine’s blueberry cakes and pies are best left to the oven.

Many of Maine’s staples can be done in the Instant Pot. The appliance is actually perfect for producing fantastically moist lobster, so there is no issue there. However, it might not match your mom’s blueberry pie.

Bean-hole beans can be made very easily in the Instant Pot, and it can have a stab at donuts too. Although donuts don’t scream Maine, the donut hole was invented in the state all the way back in 1847, so they get included.

If you have an Instant Pot, why not have some fun making apple chips, chowder, and other Maine-related dishes and snacks?

How To Reset Villager Trades In Minecraft: A Guide