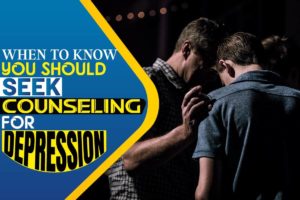 Depression is a common mental illness that takes a large toll on your happiness. It usually gradually gets more severe, so it can take a very long time to diagnose. On the other hand, some people experience brief periods of sadness, but it goes away quickly. So, how can you know when to seek counseling for depression? In this article, we’re going to discuss what depression is and when to know it’s a serious mental health concern.

According to the National Institute of Mental Health, depression is a mood disorder that affects how you feel and handle everyday tasks. These tasks include basic things like eating, sleeping, and working. To be diagnosed with depression, also known as major depressive disorder, you must have symptoms for at least two weeks.

There are different forms of depression a patient can be diagnosed with. These include:

Another mental health concern is bipolar disorder, in which people experience periods of depression, but also periods of mania. This is a completely different concern and has different screening procedures.

How Many People Have Been Diagnosed with Depression?

Depression is much more common than you may think or feel. This disorder has a way of eliminating the people who suffer from it. But the statistics show everyone likely knows at least one or two people who deal with depression. So, it’s nothing to feel shame or embarrassment by.

Counseling can help depression tremendously. Through a counseling method called cognitive behavioral therapy (CBT), many patients can feel fewer symptoms of depression. In one study, 57% of patients had no depressive symptoms after three months of CBT. Not to mention, online therapy can also be effective for treating this disorder, which can be much easier for a patient with depression.

Some patients with severe depression may need medicine and counseling to eliminate their dark thoughts or gloomy mood. In some patients, a lack of serotonin may be behind the low mood. For patients with persistent depressive disorder, in particular, medication may be necessary. This isn’t something to be afraid of by any means, as around 13.2% of adults take these medications. That’s more than 1 in 10 people taking antidepressants every day. You likely know someone who takes this class of medication and don’t even know it.

When To Know You Should Seek Counseling

Seeking counseling is an important step to take for someone with depression. Although finding the motivation can be difficult, it’s still a vital step to recover from the disorder. This is why online therapy may be the best solution for those struggling with depression. If you deal with any of the following, you may want to seek out the best counseling option for you.

As mentioned above, a lack of motivation to do daily tasks is a common symptom of depression. With depression, it can be a challenge to simply get out of bed, make yourself breakfast, and get ready for work or school. Now, this isn’t about being tired or being lazy. Everyone has days where they would rather stay in bed and watch Netflix all day. With depression, getting out of bed is the very last thing you want to do and it seems unbearable.

The feeling of not wanting to get up because of depression is often because they are not motivated to meet their responsibilities. This may be because the responsibilities don’t matter to the person or because they feel as though the outcome will be negative anyway. With depression, close to nothing matters because of the dark thoughts patients experience. If you feel a debilitating lack of motivation every day, you should seek counseling for depression.

You Have a Lack of Appetite

Similarly, with getting out of bed, many people lose their motivation to eat. While many people feel that cooking is an unenjoyable and a time-consuming task, patients with depression will skip meals entirely due to a lack of motivation. Or, they will only have a snack to eat at least something. On the other hand, many patients with depression rarely feel hungry, let alone want to cook.

Some people with depression experience the opposite, where they only feel happy when eating. This can cross over to an eating disorder for some patients. So, if you feel this way, it’s also important to get counseling for your symptoms of depression or binge eating. This likely happens because the brain is in need of serotonin, which eating can provide. So, if you deal with either a decrease or an increase in appetite along with a low mood, see a counselor either in person or online.

A Depression Test Indicates You May Have It

An online depression test may give you a hint as to whether or not you have depression. Some online tests are extremely similar to the ones counselors and therapists use in their appointments. So, they are accurate a vast majority of the time. Additionally, they can help you weed out other mental issues you may be having.

For example, bipolar disorder and persistent depressive disorder can have similar symptoms. An online depression test may be able to give insight into which you have. Not to mention, this can save you time at the counselor because you can tell them what you believe you are struggling with.

You’re Not Happy, Despite Being in Good Circumstances

Many people start to realize they have depression when their life is going well, but they still don’t feel happiness. They may feel numb inside despite recently graduating college, getting married, or getting their dream job. Or they may feel a pang of intense sadness. This is certainly a sign of depression. If you don’t feel happy after two weeks of being in a positive and happy circumstance, you should see a counselor.

No matter what type of depression you have, it’s important to get the necessary treatment. If you are feeling low in mood and struggle to do everyday tasks for over two weeks, seek help from a counselor. They can walk you through how to train your mind to think differently, or they can refer you to a doctor who can prescribe you medication if needed.

What Is A Web-Based Customer Support?

Buying Bitcoin In Australia: A Quick And Easy Process

How Vacuum Pumps Help In The Manufacturing Of  Various Computer Elements