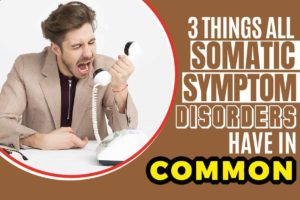 According to the Cleveland Clinic, about 5-7% of the United States population suffers from somatic symptom disorder, or SSD. That’s nearly 26 million people who have to deal with the life-altering side effects of this ailment. Worse yet, there are several different types to consider and none of them have a clear explanation.

In fact, each type of SSD has more in common than that. The disorder was initially fragmented into several categories, but it appears that the similar symptoms may be bringing things together a bit more. Meanwhile, researchers are learning new information about this disorder. That, in turn, is helping people learn how to treat it more effectively.

What Is Somatic Symptom Disorder?

Formerly known as somatization disorder, SSD is a type of mental illness. However, it involves one or more physical systems experiencing distress, disruption, and/or pain. Clinically, it’s described as a disorder that persists by way of a patient’s unhealthy focus on physical symptoms. Causes of concern typically include muscle tenderness, generalized weakness, changes in appetite, shortness of breath, or minor skin issues – things that might otherwise be overlooked by others.

Individuals with this disorder usually feel overwhelmed by the excessive racing thoughts about their health. As such, they may begin to exhibit certain habits or behaviors related to their perceived ailment. Those who suffer from SSD usually visit the doctor quite a bit more than is expected as well, with a wide range of complaints and an air of panic or anxiety as a result.

This disorder has no known cause, but it has been linked to severe psychological trauma and PTSD. Some researchers believe that certain biological factors may also play a role as well. That’s because studies have shown that SSD is more common in women than in men. However, the issue can present in any gender and at any age – all for reasons that scientists don’t fully understand yet.

At the same time, there have been a few key triggers discovered along the way. Here’s what mental health professionals typically find underneath somatic symptom disorder:

Researchers have also linked childhood physical and sexual abuse with the later development of SSD in adults. There’s a strong link between parental emotional neglect as well. So, be sure to seek professional help if you or someone you love is showing signs.

There are many behaviors associated with this disorder, including some that seem to have no correlation at all with the perceived ailment. Typically, SSD patients report experiencing more than one symptom at a time too. Plus, those symptoms can range from very mild to extremely severe depending on several factors.

Sufferers of somatic symptom disorder usually pay extra attention to their bodily processes to look for signs of an illness. They experience high levels of anxiety because of it, and they have a generally low threshold for pain as a result. Meanwhile, pain is one of the most commonly reported symptoms, especially in the arms, legs, chest, back, or abdomen.

Other signs of somatic symptom disorder may include things like:

Interestingly, there are many different forms of somatic symptoms disorder including hypochondriasis, conversion disorder, pain disorder, and body dysmorphic disorder. Regardless of their differences, they still have many things in common such as their ability to cause significant physical and emotional distress to those who suffer from them. Moreover, SSD cases can be extremely challenging to family members as well as physicians.

3 Things All Somatic Symptom Disorders Have In Common

Regardless of the type, all somatic symptom disorders have common features which include but are not always limited to somatization. Somatization is the physical expression of mental phenomena, but SSD consists of much more than that. Here’s how you can tell whether you’re truly sick or just experiencing mysterious somatic symptoms:

#1. Physical Symptoms That Can’t Be Explained

Someone with this disorder may suffer from the symptoms for a long time without a clear explanation. In fact, that’s one the primary definitive factors of an SSD diagnosis. Patients must present with similar complaints for six months or more while failing to get answers or relief from other medical procedures.

NOTE: One of the most glaring signs of this disorder is the inability to become satisfied with medical evaluations and/or treatments.

#2. No Factitious Disorder or Malingering Present

A factitious disorder is one wherein a person uses deception to convince others of a serious health condition. People with this issue will either appear sick or deliberately make themselves feel ill to fulfill an agenda. No legitimate case of SSD involves factitious disorders or malingering whatsoever.

NOTE: The person struggling may be reacting naturally to real bodily sensations or to a less significant underlying condition. They are not “faking” it and are in genuine pain.

Because of the pain caused by somatic symptom disorder, people may experience a severe reduction in their quality of life. They may have trouble completing certain tasks or maintaining jobs, relationships, and plans. In some cases, a person may even be diagnosed with another mental health issue entirely.

NOTE: It’s important for doctors not to dismiss SSD too quickly because it’s often accompanied by other health concerns.

Someone struggling to figure out how or why they feel the way they do might become hopeless when no useful information is presented. That, in turn, may cause the person to get depressed, suffer from anxiety, become obsessive-compulsive, or even idealize and/or attempt suicide. Thus, it’s crucial to seek mental health treatment if you or someone you love suffers from a physical condition that has no clear diagnosis.

How To Treat Somatic Symptom Disorders

There are several ways to treat SSD, but the best way is to learn the signs so you can prevent bigger problems. Most of the time, somatic symptom disorder starts before someone reaches age 25. However, it can also begin in adolescence while persisting for many years into adulthood.

Meanwhile, prolonged somatization can lead to serious mental health issues – all of which must be addressed first. Therefore, the most important step in treating somatic disorders is to seek counseling from a psychiatric professional for guided somatic therapy.

Somatic symptom disorder affects millions of people in the United States each year. It’s characterized by unfamiliar and/or unexplained pains in the body, typically without a clear medical explanation. But that doesn’t mean there’s nothing wrong. The discomfort and distress are real, and so are the mental health concerns underlying this condition. So, seek professional help as early as possible and be ready for a difficult road ahead.

5G Rollout In Maine – When And What Can We Expect?