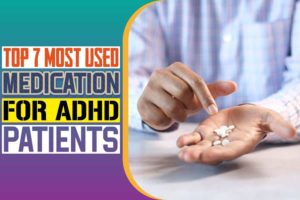 According to the Center for Disease Control and Prevention (CDC), ADHD is one of the most common disabilities in the functioning of the brain. It is most commonly found in children, but it does last as far into one’s adulthood.

Children with ADHD may struggle to pay attention, manage impulsive behaviors (doing without considering the consequences), or be highly active. ADHD is a disorder that can affect both children and adults. Inability to focus, being quickly distracted, hyperactivity, poor organizational abilities, and impulsiveness are symptoms.

Not everyone with ADHD exhibits all of these symptoms. They differ from person to person and alter with age. In addition, people with ADHD tend to have short attention spans, making it harder to succeed in school, work, relationships, and other aspects of life. Stimulants are the most effective and widely used form of ADHD medication.

Choosing the best ADHD medication can, and often is, a lengthy process of determining individual dosage and timing, often related to the patient’s history, genetics, experienced side effects, and unique metabolism.

Medications for ADHD are also often accompanied by behavioral therapy and other non-drug treatments. With all that said, here are the most popular ADHD medications patients use.

Concerta has a direct effect on the neurological system. Stimulants like Concerta allow them to climb slowly and persistently by stopping neurons from reabsorbing norepinephrine and dopamine levels.

Concerta is one of the market’s longest-acting methylphenidate drugs, lasting 8 to 12 hours. Concerta cannot be chewed or opened in any way. Concerta should be entirely eaten to function correctly – this can be an issue for specific children.

Vyvanse is an amphetamine with an additional component called lysine, which binds itself to the amphetamine, requiring the body to go through an extra procedure to activate it. Vyvanse has a lengthy half-life (up to 14 hours); however, it may take a bit longer to kick in in the morning.

Vyvanse is the brand name for the prodrug lisdexamfetamine dimesylate. It does not become active in the body until absorbed in the GI tract and converted to the active component dextroamphetamine, which belongs to the amphetamine family of medications.

Because this medicine is a federally regulated narcotic, it has the potential for abuse or dependency. In addition, Vyvanse has not been tested in children under the age of six who have ADHD.

Drugs like Vyvanese can be quite the hefty sum when it is taken regularly. Sites and companies such as BuzzRx and others provide discount on Vyvanse and other drugs, as well.

It has not been investigated in children less than six years old. Adderall XR is a federally regulated medication, according to the FDA, since it can be misused or lead to dependency. It’s a kind of amphetamine.

Evekeo is a short-acting, immediate-release stimulant medicine used to treat attention deficit hyperactivity disorder (ADHD) in children aged 3 to 12, adolescents, and adults. Evekeo is a federally prohibited drug (CII) according to the FDA since it can be abused or lead to dependence. It’s a kind of amphetamine.

Even though it benefits many people, this medicine can occasionally lead to addiction. If you have a substance use issue (such as overuse or addiction to drugs/alcohol), your risk may be increased.

To reduce the danger of addiction, take this medicine precisely as directed. For further information, see your doctor or pharmacist.

Ritalin may help with attention while also reducing impulsivity and hyperactivity, three of the most common symptoms of ADHD. It has the same active component as ADHD drugs such as Concerta and Daytrana.

Ritalin is a federally regulated medication, according to the Food and Drug Administration (FDA), since it can be misused or lead to dependency.

Take this medication in the morning to avoid sleep issues. Take Ritalin instant release (IR) pills 30 to 45 minutes before a meal. Swallow the extended-release Ritalin LA pill whole without crushing, chewing, or breaking it open.

This drug is prescribed to patients who have attention deficit hyperactivity disorder (ADHD). It works by modifying the concentrations of certain natural chemicals in the brain. Dextroamphetamine is a stimulant, which is a type of medication.

It can help you improve your ability to pay attention, stay focused on a task, and manage behavioral issues. It may also assist you in organizing your work and improving your listening abilities. This medicine is also used to help you stay awake during the day if you have a sleeping problem (narcolepsy).

However, it should not be used to cure sleepiness or keep individuals from sleeping if they do not have a sleep issue. This medication may be abused or misused.

If used for an extended period, this medication may become habit-forming. Do not take for any longer than your doctor has prescribed. Use the medication only as directed. Inform your doctor if you have ever misused or been addicted to drugs or alcohol. Dexedrine abuse can result in cardiac problems or even death.

According to the Center for Disease Control and Prevention (CDC), ADHD is one of the most common disabilities in the functioning of the brain. It is most commonly found in children, but it does last as far into one’s adulthood.

Medications for ADHD are also often accompanied by behavioral therapy and other non-drug treatments. With all that said, here are the most popular ADHD medications patients use: Strattera, Concerta, Vyvanese, Adderall XR, Evekeo, Ritalin, Dexedrine

Why Do You Need A Pigeon Control Program?

Follow These Pointers To Make Your Bitcoin Wallet More Secure!

What Should I Do If I Have A Business Idea? A Detailed Guide To...