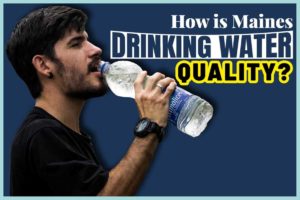 As one of the most scenic and rural states in the Northeast, many might assume that Maine enjoys crystal clear drinking water all year round. However, the truth is that the state has always struggled with issues to its tap supply.

Whether it’s the natural presence of heavy metals in its bedrock, or more recent controversies surrounding the discovery of certain chemicals that seep into drinking water from agriculture and industry, Maine is certainly not immune to water pollution problems.

Here’s a look at the current state of Maine’s drinking water, and the issues that affecting water quality right now.

Arsenic is a naturally occurring element that’s found in higher quantities in Maine’s geology than in other areas of the country. This can lead to small amounts of arsenic contamination in the water supply, especially if water sourced from deep groundwater reservoirs.

However, some studies of the state’s drinking water have found arsenic levels well above those that would normally be expected in a natural scenario. In 2010, the USGS published a survey of the arsenic levels in several wells across the state, finding that over 40% of wells contained water with levels of arsenic contamination defined as high.

Often, these high levels of arsenic are the result of human intervention in the environment, from industrial processes like mining, industrial waste, and certain types of chemical fertilizers.

When populations consume high amounts of arsenic in their drinking water over prolonged periods, higher than normal levels of certain health problems tend to arise. These issues include cancers, nerve conditions, and high blood pressure.

By the standards of the rest of the US, Maine has very soft water. With an average mineral content of just 12 parts per million (PPM), the state follows the trend of the rest of New England in providing residents with water that’s unlikely to cause issues with scale deposits or sediment build-up in pipes and appliances.

While soft water usually contains far fewer dissolved minerals than hard water, it’s not exactly true that ‘soft’ equals fewer minerals. Instead, the term refers to a lack of calcium and magnesium, as water hasn’t passed through the types of porous bedrock that usually deposit minerals into the supply. Granite underlies much of Maine, which is a relatively non-porous material.

As a mostly rural state, many parts of Maine’s water supply are prone to contamination from the results of agricultural and industrial processes. When chemicals from farms and factories seep into the environment, they can persist for long periods and accumulate in high numbers.

As these chemicals enter the aquatic ecosystem, they can disrupt the balance of animal and plant life in bodies of water. Often, levels of algae and plankton rapidly increase, consuming large amounts of oxygen and blocking out light by covering the surface of lakes and rivers. This can create a highly polluted environment that causes difficulties for public water treatment works.

According to the Environmental Working Group, several Maine municipalities regularly produce drinking water containing high amounts of the compounds dichloroacetic acid and chloroform. The most common cause of these unwanted and potentially harmful chemicals is the overuse of disinfectants when cleaning drinking water—which in turn is often the result of treating water that contains large amounts of organic plant life such as algae and plankton.

Maine has also been subject to a number of other recent environmental issues that are likely to have effect drinking water quality in more general ways. In 2016, it emerged that cows at a Maine dairy were producing milk that contained high levels of a dangerous class of chemicals.

Often known as ‘forever chemicals’, the scientific name of these chemicals is per and polyfluoroalkyl substances (PFAS). These compounds have been widely used in home and industrial goods to provide protective and non-stick barriers to things like rain clothing, cooking utensils, and firefighting foam.

Investigations have shown that PFAS were appearing in milk due to the spreading of contaminated fertilizers and ash on fields in which cows grazed. Cows then eat large amounts of the, which concentrates PFAS in their bodies.

Since the discovery, many states are just beginning to look for PFAS contamination in drinking water. Disconcertingly, it appears the PFAS problem is much more widespread than in animal products, and definitely not restricted to the state of Maine.

Taxing And Budgeting: Apps That Can Help You Keep Financially Fit

How To Write The Best Business Plan In 2021

Is A Mac The Right Choice For Gamers Yet?