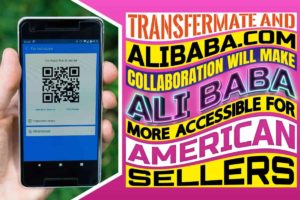 The meteoric rise of the China based online shopping emporium Alibaba.com has made its founder Jack Ma one of the world’s richest men and sent cheap goods to the four corners of the globe. But, it has been far from plain sailing as the company and its founder have both previously incurred the wrath of both the Chinese and US Authorities.

However, a recently announced collaboration with US based fin-tech firm Transfermate suggests that happier times may be ahead for Alibaba, it’s customers around the world, and of course the countless sellers who use the platform.

Let’s take a closer look at what this all means.

In case you have somehow not come across it yet, Alibaba is a Chinese global wholesale e-commerce site that feels like an Amazon-Ebay hybrid aimed primarily at retailers. Whilst individuals can and do use the site to shop for all manner of goods (you name it, they have it), the logistical realities of using Alibaba make it more attractive to bulk buyers and it specialises in business to business sales.

Alibaba has revolutionised the e-wholesale sector by putting (originally Chinese) manufacturers directly in touch with retail clients all over the world driving down the international price of wares. However, the site has attracted a fair degree of controversy with tales of scams and fake or defective goods circulating. Furthermore founder Jack Ma mysteriously vanished from public view for much of 2020 leading some commentators to speculate that he may have been detained or even executed by his own government who are rumoured to be concerned about the international power and influence the company wields. Such rumours did of course prove to be untrue and Ma has now re-entered public life alive and well (although it is still unclear where he went those months).

You can quite easily be forgiven for not having heard of Transfermate. Transfermate is a payments solution fin-tech company originally launched back in 2008 (making them something of a veteran in the space). Backed by ING and Allied Irish Bank, Transfermate primarily specialise in B2B international payments technology.  Each year they help businesses and their clients move billions of dollars across the globe in pretty much every recognised currency.

Historically, one of the challenges faced by sellers on Alibaba was getting paid internationally. This was a particular concern for American sellers wishing to use the platform who had to contend with their own governments trade war on China as well as the more routine questions of currency exchange rates and international banking fees. Indeed, in an industry where profit margins can already be firmly squeezed, many US based sellers found that using Alibaba was simply not cost effective.

This is however now changing. The TransferMate Alibaba deal means that anybody (business or private individual) with a Transfermate account can use Alibaba and benefit from preferential Foreign Exchange rates, quick transaction times, and no  transfer fees when receiving and making payments.  And it gets better – TransferMate account holders will now be allowed to access global markets when selling on Alibaba.com and can invoice clients in their own preferred currency.

There is another benefit of using Transfermate. Historically, some “Westerners” have been reluctant to use Alibaba because of reputational issues with some high profile scams making international headlines.  However, Transfermate is recognised and regulated by the Financial Services Authorities in the US, EU, UK, Australia and more lending a much needed air of legitimacy to both Transfermate and by association, Alibaba itself. Indeed, a recent TransferMate review on moneytransfercomparison found the firm  to be “reliable and safe”.

Previously, US traders selling on Alibaba had to pay particularly close attention to fluctuating FX rates and keep a firm eye on the USD/FEN exchange rate. This was never more apparent than in the last 18 months when the global COVID pandemic threw multiple spanners into currency exchange markets. Moving forward, this will become less of an issue as sellers will be able to invoice in USD and not worry about losing out owing to negative exchange rates.

The extra costs saved on fees will of course, also make a notable difference to users who enact multiple, high value transactions. Finally, it will also become easier and faster than ever for sellers to receive and withdraw their money.

Does it all sound too good to be true? Well it is worth bearing in mind that Alibaba has been courting and trying to attract American sellers for some time now with only mixed results. It has repeatedly felt like a case of “one step forward, two steps back” and US based online seller accounts remain relatively scarce on the site.

For one, despite the expected change of policy following the inauguration of the Biden administration in January 2021, the US government remains suspicious if not outright hostile towards Chinese tech. Indeed, the Federal Government ultimately has the ability to upset the entire Transfermate deal at any point either via its regulatory powers, or alternatively, they may simply block US sellers from using the platform at source.

Another consideration is that Alibaba was also fined a record breaking £2.8 billion dollars by the Chinese Government in 2021. Many American businesses may simply be reluctant to have anything whatsoever to do with a firm that appears to have fallen foul of the world’s two global superpowers and may instead prefer to stick to Amazon and eBay.

Of course, it is also worth remembering that international markets will always be impacted by FX changes and just because a US seller can invoice in USD, international buyers may simply find the exchange mark up unacceptable and look elsewhere.

What Next For Alibaba?

Whilst Alibaba has endured a rough 12 months, the fact remains that it is one of the worlds e-commerce behemoths and looks set to emerge from these set-backs stronger than ever. Whilst there is always a degree of risk in international trade (especially with the far-east), the original Silk Road merchants from where the Ali-Baba myth comes from, took this chance nearly 500 years ago and never looked back. Therefore, we expect that there will be no shortage of US based entrepreneurs willing to try their luck along the new silk road and it’s online offshoots in order to make their fortunes.

How Long Does It Take To Ship From China To The US?

What To Look For In Your First Bank Account