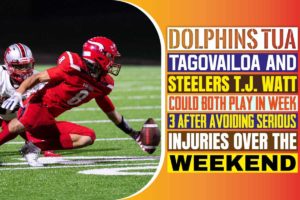 Miami Dolphins quarterback Tua Tagovaioloa appears to have suffered no further damage after sustaining a rib injury during his side’s 35-0loss to the Buffalo Bills on Sunday. The second-year QB underwent scans on Monday that turned out to be negative, which means he is in contention to start against the Las Vegas Raiders on Sunday as long as he can tolerate the pain and it doesn’t affect his play.

“Dolphins QB Tua Tagovailoa underwent further tests this morning on his bruised ribs and my understanding is those didn’t reveal any major issues. X-rays were negative. So it’ll be about pain tolerance and functionality moving forward. Raiders await Sunday in Las Vegas,” Tom Pelissero of the NFL Network tweeted this week.

The QB was carted off in the first quarter after taking a hit from AJ Epenesa on a blindside sack following a missed block. He was unable to get to the sideline before getting back on the ground and had to be helped before he was taken to the locker room via cart. He only saw nine snaps before having to exit the game, with Jacoby Brissett filling in for the rest of the game.

Tua converted 64.1 percent of his passes for 1,814 yards, 11 touchdowns and five interceptions in his first season after getting drafted by Miami, leading to questions over whether the Dolphins should stick with him. He started this season with a good performance against the New England Patriots, helping the team to a win on 16-27 passing, 202 yards and a touchdown, as well as a rushing TD

“Yeah, I think, offensively we started out the way we wanted to. We started out fast, you know, getting on the ball, trying to force communication on the defensive side,” he said after the win.

The 23-year-old suffered two major injuries during his time at Alabama, one of them being a hip dislocation. However, he came out as a rookie starter for the Dolphins. He revealed having received some advice from Dolphins legend Dan Marino ahead of his second season as a starter earlier this month.

Tagovailoa has some huge shoes to fill in Miami, given Marino’s status as a QB in his day. While the latter did not win a Super Bowl, he retired as a decorated player, winning the MVP in 1984 and also being named to six All-Pro teams and nine Pro Bowl teams. The legendary QB led the NFL in passing on five occasions and passing touchdowns for three seasons. He had his No.13 jersey retired by the team in 2000.

Meanwhile, Pittsburgh Steelers defensive end T.J. Watt is also understood to have avoided a major groin injury and could participate in Week 3 as well. Watt missed the second half of Pittsburgh’s loss to the Raiders on Sunday after being taken off in the second quarter. According to NFL Network’s Ian Rappaport, his injury isn’t as serious as first feared and he is in contention to play the Cincinnati Bengals on Sunday. The Steelers are favored to win this one on the NFL picks – they’re 1/2 for the victory.

Watt was having a good game before being pulled out, having made four tackles and a strip-sack. He has made seven tackles, three sacks and two forced fumbles so far this season. The 26-year-old is now the highest-paid defensive player in the league on the back of a contract dispute with the Steelers. He did not participate in training during the summer, although he was present. He signed a new deal right before the Steelers’ season opener against the Bills in week 1.

The team made the wiser decision of presenting him with a four-year contract worth $112 million, $80 million of which is guaranteed, plus a $35 million signing bonus.

“Man, I’ve been dealing with pressure my whole life,” he told ESPN after signing his new deal. “… I’m built for this. And I truly believe that nothing monetary will change me as a person. The work that I put in will not change. It will only grow.

“It’s my job to prove all these people that have put this amount of money to me and stood on the table to say they want me here, to prove them right. I know I can do it. I know exactly what it takes. I’ve been doing it my whole life. It’s just about continuing to do it and staying hungry. And I guarantee everybody here right now and everybody in this building, I am still hungry.”