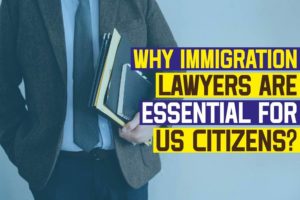 A countless number of people dream about moving to other countries for better life experiences and to lawfully live and work there. But immigrating to other countries is not as simple as it seems, especially if you are a US citizen who wants to move to the UK, because of some immigrating policies made by the United Kingdom. Some people may succeed in achieving their immigration goals on their own but many of them can fail, which can ultimately lead to one of the biggest nightmares, that is getting banned or being deported.

A person might consider the immigration process as mere filling of some forms, rather it is a much complex process that requires answering many complicated questions and understanding terms and conditions in a language which has a specific meaning unique to immigration laws and many of the general public might not be able to interpret it correctly. So, before we get started you need to know a little bit about immigration attorneys in general and how they help us.

What Do Immigration Attorneys Do?

Immigration attorneys or lawyers can explain to you certain options that you didn’t know existed, for example, certain categories that you might be eligible for that you were not aware of. They can give you a roadmap and some strategic advice until the process is finished.

Experience in handling your issue

Immigration attorneys provide you with their qualified experiences as in a lot of cases they might have handled a client like you before having the same issue so they know what kind of documents and evidence might be further needed which ultimately makes the process a lot quicker and easier.

Another really important aspect is that getting your process done by an immigration attorney decreases your chance of having any mistake in the process subsequently, as even a mistake as simple as leaving a box empty can get your application rejected. Also, some other mistakes like attaching illegible checks or misplacement of any form can cause a huge disturbance in your process, so attorneys are there to make sure that your process is done rather smoothly.

It is also important to know that immigration processes are time-sensitive so limiting the probability of mistakes is important to avoid delays, as some slow processes may take up more than a year or two to complete, and to protect yourself from losing the opportunity by putting your status at risk as some mistakes are irreversible like putting up any wrong information by mistake may lead the country’s process to believe that you committed fraud that ultimately may lead to a lifetime ban.

Another important point to note is that lawyers have access to information and resources which general public don’t have, for example they know how to exactly read the laws and they know all the exceptions and how to apply them to your case, which you might not be able to do even though most knowledge is available online and on website.

And last but not the least, immigration lawyers prevent you from so much stress and from freaking out at the last minute or in the middle of the procedure due to some questions you might have like what to do if you recently lost your job, etc. Hiring an attorney can help you with that as if you don’t hire one before there is no use in hiring one in the middle of the procedure.

Why Immigration Lawyers Are Important For US Citizens?

(Especially if you want to move to the UK)

Each country has its agency that manages the immigration process for that country. The agency that manages this for the United Kingdom is the UK Border Agency (UKBA). Unlike the US, the UK does not operate a ‘Visa Waiver Program’ which means one cannot stay in the UK without a visa even for 90 days as applicable in the US. Although the US is under the UK’s designated countries that means people from the US can also come and apply for visas.

Then what do you need immigration attorneys for?

The answer is that despite allowing visitors from the US for tourism or business, the UK has other specific policies that are needed to be fulfilled before entering the UK regardless of their duration of stay.

It is called UK entry clearance in general and people entering in any other ways like a parent, charity worker, intern, prospective student, spouse/fiancé/partner, or any American citizen coming to work or to marry, all are required to obtain UK entry clearance.

Some policies are specifically made for Americans whether they come there as a tourist or as a business visitor, either for marriage or for employment. So, for each kind of activity different rules are there that are needed to be followed and ultimately it requires more paperwork than any general immigration process which makes the need for an immigration attorney even more important.

FOR EXAMPLE, an American citizen visiting as a business visitor should:

These are very few examples of what kind of difficulties a person from America might face in the UK which he would not be able to handle by himself.

In conclusion, we can say that an immigration attorney is an ultimate need for people moving to other countries specifically for people moving from the United States to the United Kingdom due to some immigration policies for Americans that can ultimately become a confusing process for a layman and can cause some serious damage to their status regarding the process. So if you have a query, ask an immigration lawyer right away!

Boy Scouts Of America Prepare For Barrage Of Abuse Lawsuits

What Are Some Easy Methods To Boost Mac’s Performance?

What To Do If MRS Associates Is Calling You

What Must Debt Collectors Tell You?