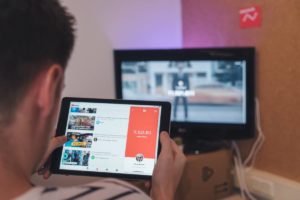 The importance of comment likes on YouTube is often underestimated even by the most talented entrepreneurs and marketers. Most people think – who would even care about likes for video feedbacks. But in fact, this is a significant indicator of the engagement and popularity that can be acquired on this network. So, the conclusion comes that there is a big part that comment likes play in the promotion of the video on YouTube. In this list are exposed the most interesting and top liked comments that ever were written under a video – the ones that have at least 500k likes, or more. Looking through those, we shall try to find out what is the recipe for the perfect engaging comment and how it affects the overall progress on YT.

This incredibly witty comment was left under the hit video of Billie Eilish – Bad Guy. Users have highly appreciated the parallel with the original text of the song and have left more than 3 million likes showing they have got it. This feedback shows how people love the good joke that perfectly reflects the original format.

This one is an example of community humor that isn’t always obvious for newcomers. This comment concerns the participant of the video who is being “held hostage” for fun and as a motivator for users to interact with the author. It has gained almost 2 million likes.

3. “We’re So Honored That The First Ever YouTube Video Was Filmed Here!” 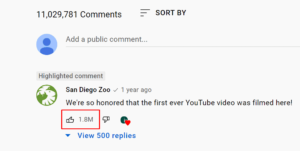 This comment is a showcase of good interaction and effective strategy for brands and businesses on youtube. It was left by the San Diego Zoo official channel to highlight the fact that this very video was the first one on youtube. The brand has exposed the right attitude and drive attention to their current initiatives by celebrating important milestones. No wonder this fun fact has acquired 1.8 million likes. 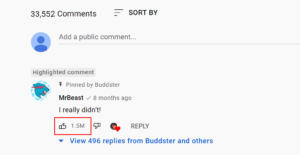 This is the case when the comment that was left for fun under the video of one influencer, makes you an influencer as well. This comment is the answer to the old story, and it has gained not only 1.5 million likes for the honest reaction of the entrepreneur, but also started an active discussion with almost 500 replies.

5. “This Song Was Inspired By Many Things That Have Happened In My Life Since Releasing My Last Album. I Want People To Feel Hope And To Know You Will Come Out The Other Side Stronger And A Better Version Of Yourself.”

Selena Gomes has written this comment herself under the music video of hers on the Vevo channel, revealing her feelings and motivation. This way she has shared her personal thoughts with the audience and was able to gain more attention and appreciation from her fans. This message coming from the heart has gained 1.2 million likes and it proves that nothing is more precious for the community than being sincere and open to communication, as well as exposing your experience.

The song and video clip for Rick Astley’s “Never Gonna Give You Up” are memetic as hell, and no surprise that people will actively comment on videos that contain this material or mentioning of it. The reason why this song has gone viral in modern social media isn’t obvious at all, and the opinion wondering about it collected 1 million favors – people simply cannot guess the secret of this phenomenon.

Eminem’s track “Rap God” is a true masterpiece of this industry. The man has a talent and he shows it at its best. And this comment for the video simply states the fact, which was approved by 800k people who think so. And its author is probably a witty person too.

8. “This Isn’t Your First Time Here And You Know It”

Rick Astley and his immortal song here again. Such comments are one of the most popular and can be noticed in many viral videos. The song has something magnetic in it, or maybe it’s the moves of the singer while he performs it in the clip? Whatever the reason, you have definitely watched it more than once!

9. “How Every Teacher Talks When You’re Taking Notes”

To explain why this comment has gathered 735k likes on Youtube, it is enough to reveal the name of the video: “World’s fastest talking man sings Michael Jackson’s BAD in 20 seconds”. The comment is a direct hit made by the joke. Probably every person in the world has experienced this feeling and the truth always has a bit of fun in it. Hence, we get another highly appreciated video reply that resonates with the audience.

The original video that this comment addresses, is the glorious clip for “WAP” by Cardi B. the lyrics of this song are controversial, to say even dirty, so older generations can react negatively to these, although younger people have soon made it a trend. The song was one of the most discussed at the time of its release, and the truth is, many people would agree with the author of the comment.

So Why Do You Need To Pay Attention To The Comment Section, And Monitor Likes?

First of all, likes on YouTube wherever they are left are an active indicator of engagement level, and they are also an important factor that the algorithm considers for ratings and suggested content. Having many likes in your discussions helps you to understand how the audience actually reacts to the materials they see. For example, if your content isn’t too good and people favor critical comments, this is the source for your improvement. In the opposite case, you have proof of your competence.

As you can see, many comments in this list are left by the authors of the original video, and this gives us a conclusion: sometimes we have to add some more explanation to our creations or simply show that there is no arrogance in our actions, as we can look at our work from another angle.

Here are a few tips for handling your comments on YouTube:

Likes on YouTube comments are highlighting the general thought about your content. Usually, the most liked comment is an indicator of what people feel when they watch your video. Or the audience reacts to a good wit – this is also a point for you, as you can use the joke as the user-generated content and create a meme.

What’s Next After Cryptocurrency, Metaverse, And NFTs