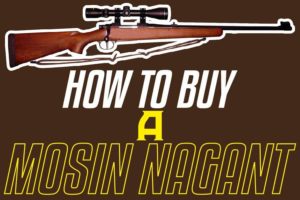 The Mosin Nagant is one of the most popular rifles in the world. The rifle was designed in the 1890s and is a five-shot.

The riffle enthusiasts also refer to it as the three-line Model 1891: Infantryman riffle while in its original and purest spec.

The original rifle was the M1891, but there have been several redesigns and refreshes since then, but the basics haven’t changed. The best and most prolific model of this rifle is 1891/30.

It had a war sniper rifle in World War II.  The Mosin Nagant and PEM scope were widespread in the Russian troops. The Russian snipers were so effective and efficient, and they instilled fear in German troops.

The Mosin Nagant model M44 is another that emerged as a favorite. However, the riffle comes at a premium price.

This article will find all the critical factors to consider when buying the Mosin Nagant. Let’s find out more.

How To Buy A Mosin Nagant?

The Mosin Nagant is one great piece, but it’s pretty expensive. Here are some of the things you need to consider.

The Mosin Nagant price is highly volatile. The cost of the rifles shot up during the Obama reign when he banned their import.

The value went from $80 to a high of $550. Previously it was known as the garbage rod, but it’s now a collector item. Before you buy this rifle, you need to confirm the base price.

Would you please do this by checking several gun broker websites and other gun stores to know its price? Currently, you can get a great Mosin Nagant at $300.

The rarest Mosin Nagant model sells for up to four times the base price. The rarest are ex-sniper and sniper models. The sniper model is known as PU, and its appearance is pretty neat.

The riffles have better barrels, plus the handle is changed and has a different scope. The Westinghouse and Remington are rare, and the Finnish Mosin too.

Therefore do not accept anyone to sell you a Mosin Nagant model at an inflated price. Always avoid the expensive models, or you can get one from people who do not know the riffle’s worth.

The serial numbers usually have maker symbols, inspection marks, and proof on all the gun parts. You can choose a rifle that has all matching numbers.

The rifle will indeed feel good in your hands, but it won’t shoot better. The sellers advertise Mosin Nagant as “all matching” don’t buy these rifles for now. There are chances that you can get non-matching Mosin Nagant at a meager price.

The Russians usually take good parts from broken rifles and refurbish worn and old rifles. The accuracy of the gun will be great without matching the set.

If you are looking for a shooter, for hunting, or for fun, do not buy for the pretty ones; since they do not offer accuracy. The Frenkenmosin is one of the ugliest Mosin rifles, but it shoots better.

You can customize the barrels, which can help it shoot better. However, if you need a Mosin to look and show friends, do not go for those in mint or pristine condition.

The best rifles for this function are shot-out barrels and a bad crown and soft trigger, plus it’s cheap.

The small gun stores, especially those found in rural areas, usually have treasures that the big stores lack. However, the small stores typically charge high for their guns because they may struggle.

Others sell the rifles at a low price to move things quickly because the storage space is limited. The faster they sell a gun, the quicker they can put another riffle on the shelf for customers to see.

Ask Those around You

There are more than one million Mosin rifles in America. Most of these rifles were from ten to thirty years ago when their price was below $100. During the day, the gun was cheap, and many considered it garbage.

The rifle’s value was similar to the Hi Point’s; the shooter discredited it because it was cheap. Therefore if you get someone with an old Mosin Nagant in their basement and has shot it like three times some years, you can get it at a bargain. So if you need a Mosin, you can ask around to find out who owns the rifle.

If you are new to guns and need an inexpensive weapon and has been on the market from the beginning of time, the Mosin Nagant is the best.

People collect rifles because of precision, usefulness, and beauty. The Russian Mosin Nagant is a popular choice for experienced and new collectors. Today the Mosin Nagant rifle popularity in America is due, and they are many in the market.

You need to consider certain features and factors before buying the rifle seriously; this article has mentioned the factors.

People do buy the Mosin Nagant riffles because of two options which are:

The Mosin Nagant rifles can are popular among shooters or collectors. The individuals collect these rifles for different purposes, store and shoot with.

The condition of the riffle will also depend on who owns the riffle, i.e., the shooter or collector.  You might find Mosin Nagant in its original shape or meticulously restored using the historical processes and tools.

While another Mosin Nagant rifle might be modified to increase shooting efficiency and experience, the firearm will be accurate, comfortable, and have excellent aesthetics.

Therefore before purchasing the Mosin Nagant rifle, you need to be sure of its functions. Whether you intend to keep the riffle a collector piece or you want to shoot it. If you’re going to do both, you need to know the one you will do more.

If you only want to shoot with the Mosin Nagant, the cheapest Mosin Nagant will do fine since you can clean or smoothen the rough edges by yourself.

If you want a rifle that will stay long enough, you will indeed pay more for the collectable version.

However, today online shopping is quite popular. Because the prices are better, you need to know that the dealer and shipping fee will increase the Mosin Nagant price.

The price will be a bit lower or higher than the counter price; thus, you won’t save money. Plus, online buying means you won’t get to pick the riffle.

Therefore you might get an inferior weapon from the store. Therefore it’s better to physically evaluate the riffle and see if it has any issues.

Is The Mosin Nagant A Great Investment?

After the world war, the market became flooded with both new and used Mosin Nagants. Then the riffles cost between $50 and $60. Today they are a cult collector’s firearm and an excellent investment.

The Mosin Nagant rifle can take over the North American game, which means it’s an excellent rifle. The prices of these riffles are surely creeping up, and their demand continues to grow as supply dries up.

Today the Mosin Nagant price is from $250 for a well-used one and goes up to $1000 for perfect ones. Some specific guns do cost a lot than Mosin Nagant.

However, you can depend on a Mosin Nagant that costs $400 to $600; a rifle in this price range is clean and effective. Plus, if you are a hunter and love shooting, a Mosin Nagant will add to your experience.

What Makes The Mosin Nagant A Big Deal?

The Mosin Nagant is a big deal because of its effect on world history. The Russian first used the gun in the 1870s. It was a single shot, and they took a heavy defeat in the Russo-Ottoman war that happened in 1877-78.

The Mosin Nagant and other two riffles were among the responses; the Russian military then evaluated these riffles and eventually discarded them. The Mosin Nagant rifle might not have a legendary profile that AK 47.

But its impact in history is almost similar to that of the AK 47. Today the rifle is still used in military conflicts in Africa, the Middle East, and other third world countries.

By purchasing this weapon, it means you are following the footsteps of revolutionaries, soldiers, farmers, etc. It was simply the rifle for every man.

People are going for the Mosin Nagant; a Russian rifle made more than 100 years ago because it’s cheap, excellent, and offers hunting accuracy.

Therefore if you get a perfect Mosin Nagant rifle, you indeed have an absolute bargain and seriously hunting rifle.

Today, there are approximately more than 37 million rifles globally; it won’t be hard to find a Mosin Nagant that’s on sale.

You can check them out at Gun broker. Alternatively, you can find them at Guns International; the platform has a better selection and offers more quality riffles.

11 Ways To Keep Your Marriage Happy And Avoid Divorce

The Pink Diamonds Of Argyle

How Do Hackers Find Gateways Through Public IP Address?

IT Staffing And Recruiting Talents