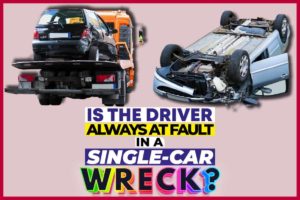 Since there are no other drivers involved in the accident, in most instances, the driver is held to be at fault in single-car accidents. However, there are some cases in which the driver in a single-car accident isn’t liable for the accident they’re in. In order to establish who is truly at fault for an accident, it’s vital to work with a lawyer who is experienced in these types of accidents. By doing so, you could avoid paying for the damages of an accident for which you aren’t responsible while collecting the compensation to which you’re entitled.

What Is A Single-car Wreck?

A single-car wreck is one that involves a single car that is damaged after hitting a piece of property or natural obstacle. This may occur due to the driver involved in the crash attempting to avoid another driver who may be behaving in some way recklessly. On the other hand, it may also occur truly in isolation from other drivers on the road. These latter types of accidents can be harder to establish that the driver isn’t at fault, but it’s not impossible to do so.

Am I At-fault For A Single-vehicle Accident?

The answer is: it depends. Your fault for a single-vehicle accident is open to debate, especially if there were other drivers on the road or if the road itself was in some state of disrepair or featured elevated dangers that weren’t addressed by the proper authorities. If you were injured in a single-vehicle accident, it’s important to speak with an attorney who handles these types of personal injury cases in Georgia. While you may think you have to handle your medical expenses on your own, this may not be the case if it can be proven that you aren’t entirely 9or at all) at-fault for your accident.

How Do I Establish I’m Not At-fault For A Single-vehicle Accident?

If you’ve been in a single-vehicle accident, it’s important to establish that you’re not at-fault for it. This can be done in several different ways:

Even though you may have been on the road alone during your accident, it’s not immediately apparent that you’re responsible for the accident. This is why it’s vital to contact an attorney who specializes in accidents after yours who can then begin an investigation into the circumstances surrounding your crash.

What Should I Do If I’ve Been In A Single-car Wreck?

If you’ve been involved in a single-car wreck, then it’s important to do the following:

Working with an attorney who specializes in these types of accidents can give you the leg-up that you need to avoid assuming responsibility for an accident you’re not responsible for. You can also be in a better position to obtain the compensation to which you’re entitled.

After a single-car accident, it can be difficult to establish that you weren’t at fault, especially if there weren’t any other drivers on the road. However, it may be possible that you are not entirely responsible for the accident or that another party is actually responsible for the damages done to your car and that which was done to other property. An experienced attorney who can navigate these arguments can help you avoid being named the responsible party for the accident while helping you to obtain the compensation to which you’re entitled.

Solutions To The Global Energy Crisis