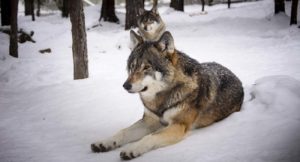 From historical fables to blockbuster movies, wolves have been an integral part of the human story. With their majestic howls, wolves have their stories intertwined with ours and that is not going to change anytime soon. Also referred to as gray or grey wolf, the wolf (Canis lupus being the scientific name) is a canine that is native to the wilderness and remote areas of Eurasia and the continent of North America. In terms of evolutionary trends, the wolf remains the largest extant member of its family. Wolves have long, thick and gray winter fur that is white but in some cases, it is possible to see wolves with brown, black or even red fur.

Really, How Big Are Wolves Compared To Humans?

Wolves are actually bigger than many people think. Well, on average, males can weigh well up to 80 kilograms (that is about 180 pounds) and their female counterparts can weight typically about 37 kilograms on average. Of all the Canis species, wolves are much bigger and have less prominent body parts like the muzzle and ears.

In terms of the shoulder height, wolves measure from 66 to 81 centimeters and that clocks in at 27 to 34 inches. In terms of body length, wolves range from 1.2 to 2 meters overall. The average male gray wolf has a weight of about 45 kilograms (100 pounds) while the female has about 36 kilograms (80 pounds).

Even though wolves can reach impressive sizes, it must be stated at this point that wolves also look far larger than they really appear and that is due to the thick fur. But even at that, the largest of all the wolves are actually really as big as fully-mature and grown humans. They are huge and really interesting to observe but the funny thing is that these canine giants can be shy and scared of humans and they typically keep away from us. However, they will warm up to and accept human beings who understand them or have a better understanding of their behavior.

What Is The Largest Wolf Species On The Planet? 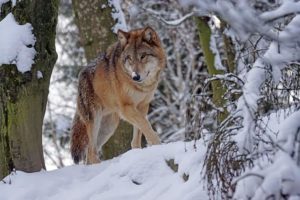 That said, it is good to also point out that the biggest wolf on the planet is the Canis Lupus Occidentalis. Also referred to as the Mackenzie Valley wolf, it stands at an impressive 32 to 34 inches at the should and can weight up to 80 kilograms (that is approximately 180 pounds). But even at that, there are instances where wolves as massive as almost 240 pounds (107 kilograms) have been sighted. In fact, the report out there is that a wolf killed in Drayton Valley in Canada weighed a hefty 230 pounds.

The Mackenzie Valley Wolf has long but strong limbs and these allow it to move with ease across the rugged surfaces filled with snow or the ragged edges of the mountain ranges. With its barrel-like chests, it has huge lungs that allow it to adapt to incredible heights thus allowing it to cope with various environmental factors and stress.

Legendary walkers, these wolves can trek as much as 70 miles in just 24 hours. The neck is highly muscular as it forms a support base for the massive head of the wolf which is also used in attacking the prey. The same skull contains the massive canine teeth which work in concert with the big jaw muscles with which it bites and breaks bones of the animals that it hunts down. It is this set of massive features that allow the wolves to tackle animals as big as the bison and moose. The same configuration applies to other wolves too like the Arctic wolf, Great Plains wolf, Eastern Timber wolf, and the Mackenzie Valley wolf.

Even though many people are scared of wolves and see them as man-eaters, the truth is that wolves are very far from being man-eaters. As a matter of fact, wolves are generally scared of human beings. Historical records show that even over time, wolves have not really cohabited with human beings, they often chose to reside as far away as possible from humans.

One very amazing thing with wolves is that they have the innate ability to sense your emotions even without your knowledge and that is why it is very good to remain really calm and non-threatening when approaching them. This prevents incidents of aggression that can turn out bloody and really messy. Normally, a wolf will never attack you or become aggressive unless it feels you may want to attack its pups.

One of the best-known types of wolves is the grey wolf (Canis Lupus). Also referred to as the timber wolf, it is biggest of all members of the wild dog family. In the past, the once roamed the Middle East, Eurasia and North America in massive numbers. But today, their numbers have dwindled significantly because of the destruction of their habitat and overhunting.

It is now classified as an endangered species as stated in the 1973 Endangered Species Act because hunting them is an activity that still continues in several nations. This is because many animal owners attack them to protect their cattle while in some other places, they are hunted down just for the fun of it. Grey wolves are the masters of adaptation and this explains why they can be found just practically anywhere. From grassland plains to mountains to forests of Scandinavia, the grey wolf seems at home everywhere.

They are called grey because of the color of the coat they have. The coat can have some blots of other colors like yellow, red or even black. Typically, fully-grown grey wolves can weigh up to 125 pounds. Expectedly, the males are often larger than their female counterparts and can reach up to 175 pounds in some instances.

During winter, the fur grows far thicker and can reach a depth of as much as 2.5 inches in various parts of their bodies. When placed side by side with big dogs, the grey wolf comes up with a narrow chest and more slender legs. In terms of jaw muscle strength, grey wolves have very impressive figures. In all, wolves have a total combination of 42 teeth. The typical set has four canines, 12 incisors, 10 carnassials and molars alongside 16 pre-molars. The canine tooth of a wolf can be up to one inch in length and is not to be joked with. This is because it is very sharp, strong and a little bent. It is because of these features that the wolf can easily grip on prey and sink its teeth into it. It is the same dentition that assists the beast to consume virtually all its hunt.

Movement across different types of surfaces is made easy with the presence of specially-designed paws. In between each toe, there is a minor netting that enables the wolves to walk over snow with a lot of easy. As the wolves move on snow, their weight is spread all over the surface. The presence of hairs and blunt claws also assists the wolf to hold on to wet or slippery areas. To prevent freezing are networks of well-designed blood vessels in the paws. All these features serve the wolves very well especially during long and inhospitable winters. 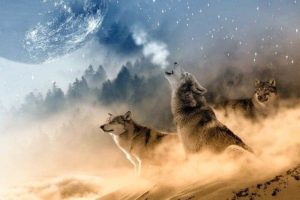 It has been observed over time that wolves and human beings actually have a lot in common. For example, both wolves and humans place a lot of importance on family bonds and we go to great lengths to protect or even provide for our relatives. The history of wolves and humans goes a really long way back in time but there is a sense of despise for the wolves particularly in pastoral communities where herders accuse the wolves of attacking and killing their cattle.

Human beings have also featured wolves prominently in several mythologies and fables thus showing the intimate connection that both sides have had for centuries. For example, in ancient Greece, wolves were linked with Apollo, the revered god of light and organization while the Romans linked the same animal to Mars, the god of war and agriculture. They even believe that the founders of their city, Romulus and Remus, were raised by a female wolf. In Scandinavia, the myths had it that a massive wolf called Fenrir was the first offspring of Loki.

Among the native Indians of Oklahoma, the myth had it that the first animal that was taken to the world and it was when human beings murdered it that they were punished with death, strife and all sorts of problems. Among the same tribe of native American Indians, it is believed that Sirius is actually the wolf star and that its features represented its trip to and from the world of the spirits. In China, astronomers have the wolf standing in for Sirius and it is known as the blue beast while the star itself is referred to as the heavenly wolf. All these points to an enduring legacy of relationship between human beings and wolves.

Where Do Banks Get Money To Lend To Borrowers?

How Trucking Companies Cut Costs At Your Expense

What Does In Dispatch Mean Shein: Shipping Terms Explained

What To Look For When Buying A Gun