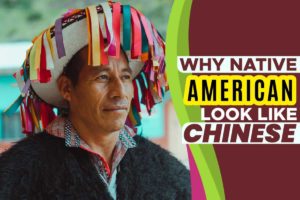 Have you ever wondered why some Asians bear a resemblance to Native Americans or have similar features? Although some people might think that this is simply a matter of perception considering how far these two lands are, there is some scientific basis as well as theories about this resemblance.

To put it simply, this is primarily because the two races share similar genes, which lead them to develop similar features.

This is what results in a resemblance similar to how siblings can sometimes share similar facial features. A common genome being passed down through generations will cause a certain portion of the populace to have this resemblance.

In this article, we’ll look at some recent discoveries and studies that will help link to this resemblance.

One of the most popular and well-evidenced theories suggests that the “first Americans” descended from Asia. Residents of East Asia traveled via a land bridge to what is now considered Native America. This has been estimated to occur 15,000 years ago.

What this theory denotes is that there was a large migration of people from East Asia to America. The descendants of these people had genes that characteristic of Chinese or Korean people, which is why you can often spot the similarities between them.

However, what about the percentage of Native Americans that do not bear a resemblance to Chinese people? If a common descendant is at play here, then you would notice a large portion of these people sharing features. However, that is not the case with results varying.

What we’ve mentioned and covered is but a very simplified and small look into things. The real picture is much bigger, and there are a lot of things at work. Let’s look into some of these.

How Different Origins Come Into Play

The first thing you need to realize about this debacle is that Native Americans do not have one fixed origin.

In a surprising study led by Eske Willerslev of the University of Copenhagen in Denmark, a different origin was found for Native Americans. Having discovered an arm bone near Lake Baikal in Siberia, a DNA test was conducted on it.

Results showed that the arm bone had DNA samples that resembled that of Native Americans. What did this mean? This means that a portion of the Native American descendants does have West Eurasian origins. It is approximated to be one-third of the genome, which is a shocking discovery.

So how does this theory interact with the migration from Asia? Scientists theorize that there was more than one migration, with the latter taking place after the land bridge had collapsed.

This second migration is how a portion of the Native American populace has West Eurasian genes. Some theorize that these two groups had met up in what would be present-day South America.

Even though there are Native Americans that bear a resemblance to Asians, there are people who don’t due to possessing different origins. If the theory of the two groups’ meeting is true, this would also result in their descendants having different characteristics.

The Environment At Work

One of the commonly seen cases of this is in skin tones. More exposure to the sun can result in a tanned skin tone which can muddle the resemblance. However, due to the various ways the environment factors in, it can be hard to trace the effects.

Where does Native American DNA come from?

One of the important things you need to know, as revealed from recent research, is that there is no singular origin of Native Americans. There have been traces of East Asian DNA as well as old genetic links that point to Siberia. So it is incredibly difficult to point to one place where their DNA stems from.

What is the oldest Native American tribe?

Most studies point to the Hopi Indian tribes as the oldest Native American tribe. Their history in Arizona is estimated to date back to at least 2000 years.

What did Native Americans call America?

There is no definitive name that they stuck with. Due to the different languages used, it is hard to trace back to a properly agreed-upon name. Many of them stuck to descriptive names instead.

How many full-blooded Native Americans are left?

Next to none. Considering the time passed and the evidence of a second migration, it is unlikely that any traces of full-blooded Native Americans are left.

Has this article been successful in answering why Native American look like Chinese people? Hopefully, yes.

Although, at times, it might seem that the resemblance is superficial, there is scientific backing and a possible explanation to it.

Bill Could Extend Healthcare Benefits To Immigrants In Maine

5 Twitter Tools You Can Use In Your Marketing Strategy