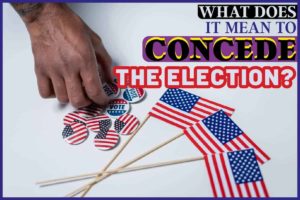 If you are living in the US, then you must know how the election works there, but many people outside of the States find it hard to understand. There are many layers to the US elections, and therefore, it takes some time to get our heads around it. Now among many of the things people don’t understand, conceding is a big one.

Many ask what does it mean to concede the election. It’s when the defeated candidate officially accepts the election result.

People don’t have a clear idea about it as it is not something that plays a big role in the whole election. So, today I am going to tell you all about the notion of conceding when it comes to the elections.

Read on to find out all about conceding the election.

In the US election, the results are determined by the ballot box. And electoral points are given to each of the candidates, the one who gets to 270 points wins the presidential election.

This is just a formal way for the opponent to accept their defeat when they see that they did not receive enough points to become the next president of the United States of America.

There is no legal obligation for the losing candidate to concede when they see there is no scope for them to win the election. This is merely a gesture that candidates have shown in the past out of respect.

What Is The Tradition?

Traditionally during the US elections, when a candidate loses the US presidential election, they are supposed to promptly and very publicly acknowledge that they have lost the run. This is usually done so in a speech to show there is no resistance and the power has transitioned effortlessly, without any struggle.

Even though it might be a little difficult for the candidate to concede to the election after spending so much time, effort, and money, the candidate does it gracefully.

Most of the things covered in the speech of the losing candidate are a celebration of the democracy in the United States and less about themselves. And as I have mentioned before this is not a part of the law or the Constitution of the United States, this is more of a voluntary gesture. That has become more of a tradition now.

In recent history, most of the losing candidates have not refused to concede. This is an act of good faith, and it also shows how they respect and withhold the vote of the people.

However, that has not been the case in the last presidential election when Donald Trump, after his very apparent loss to Joe Biden, refused to concede. Even though it did not have any part to play in who became the president of the United States, it did cause a little bit of chaos.

Trump supporters all across the country saw this, and they too refused to accept the defeat of their presidential candidate. This, later on, lead to acts of rebellion at various times after the election.

Things escalated enough that they even marched to the Capitol in Washington DC.

Can A Candidate Win After They Have Already Conceded?

Well, if the situation arises that a candidate has conceded and then end up winning the election then they would go on to be the president of the United States. In that case, the concession would mean nothing.

1. What is an example of concession?

A good example of concession in a presidential election would be from 2012. This is the second time Obama won the election. Romney conceded to Obama when the ballot point of Ohio went to Obama. He saw his points in comparison to Obama’s and accepted defeat.

2. How do you concede an argument?

Conceding means to accept something, whether it be defeat or a point made. So if you are someone who is conceding an argument, that means you are accepting a valid point made by your opponent.

If you still have any confusion regarding what does it mean to concede the election, then let us know in the comments.

Did Canada Resolve An Unemployment Problem?

Bitcoin Rush As A Reliable Helper In Cryptocurrency Trading

What Programs To Install On A New Computer: Full List