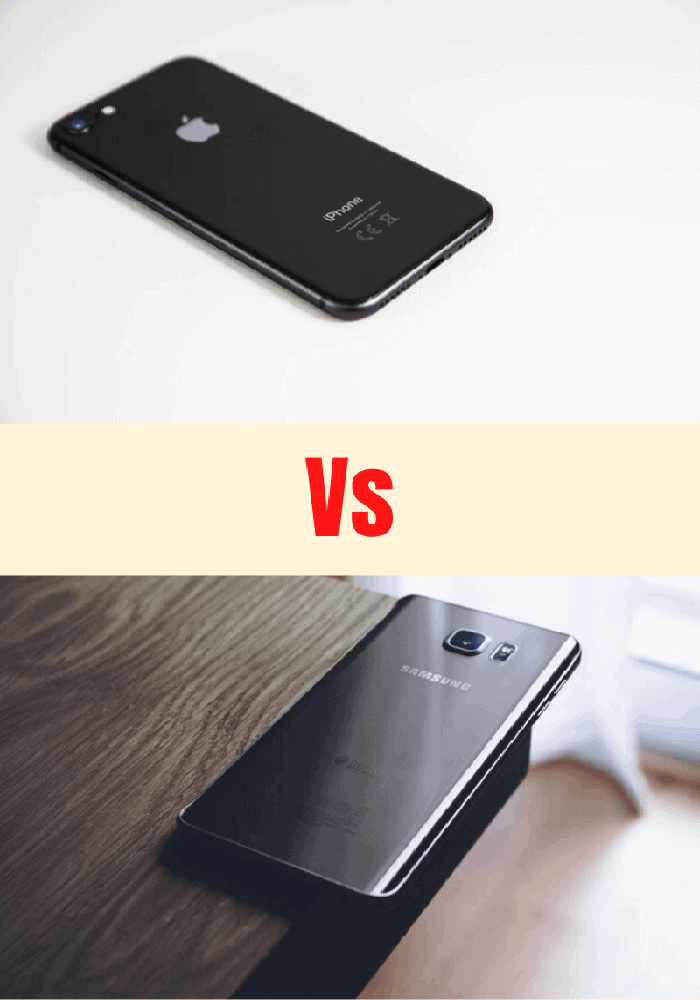 The battle for supremacy between the iOS and Android devices has been on for quite some time now. That’s why questions such as, “iPhone or Samsung, which is better” has become a hot topic over the years.

Truth is considering the price point of both mobile devices (iPhone and Samsung Galaxy phones); such a comparison is essential. No one would be happy to waste money on the wrong choice.  Isn’t it?

Now the iPhone and Samsung, which of them is better?

The first step you need to take is to compare the features of both phones. Take an in-depth look at their cameras, picture quality, battery life, screen size, storage capacity, security features, price point, and others. Your comparison should be based on the model of iPhone or Samsung phone you wish to buy. The reason most people would choose the iPhone over Samsung Galaxy is technical support. Another is the fact that you can update an iPhone to the latest iOS with ease. Samsung Galaxy phones also have top-notch features that make them a wise choice.

Continue reading for more information on this topic!

The History Of The iPhones

Steve Jobs is a popular name in the tech ecosystem. He introduced the iPhone and did a lot of amazing stuff with the company, Apple. Today, Steve is no more, but the iPhone lives on. It has become Apple’s most popular products across the globe. The iPhone made Apple the most valuable company in the world.

The iPhone is an iOS device with tons of features that usually turn heads. The first iPhone came out in 2007, but since then, Apple has produced a series of iPhone models. You can access loads of apps for iPhones on the App store owned and run by Apple.

The History Of The Samsung Phones – (Samsung Galaxy)

Samsung is a South Korean Company founded by Lee Byung-Chul. He was one of the most successful businessmen in the country. The first Samsung Galaxy phone, a rival to the iPhone, was released in 2009 (two years after the first iPhone was announced). Since then, Samsung has been killing it. Samsung Galaxy is one of the best Android phones on the market, and it has remained so for years.

Alright, let’s compare both mobile devices (Samsung vs. iPhone) so you can make an informed decision.

Design of the iPhones vs. Samsung

No doubt, both mobile devices changed in terms of their designs. The iPhone metamorphosed from the plastic body it used to have to something more sleek and modern. You can see that in the iPhone 11 Pro Max, which happens to be the biggest iPhone model at the time.

Like Apple, Samsung has also made a significant improvement in product design. The company now uses eco-friendly materials instead of plastic. The Samsung Galaxies of these days come with modern design and looks super cool.

So, when it comes to design, the iPhone and Samsung both have it. Both devices are produced with eco-friendly materials and look highly attractive.

Display of the iPhone vs. Samsung

Henceforth, our comparison will be between the iPhone 11 Pro Max and the Samsung Galaxy S20 Ultra 5G. These are the highest mobile devices from both companies as of the time of writing.

Samsung upgraded their mobile device, as seen in the Galaxy S20 Ultra. Galaxy S20 Ultra now features a 6.9-inch screen, while screen resolution is given as 3200 x 1440. Furthermore, the S20 Ultra screen-to-body-ration is 90.70%.

So, the S20 Ultra is the winner in the aspect of screen size. Thus, if you are particular about the screen size of your new phone, the Galaxy S20 Ultra is a wise choice. You can see that in the details above.

The camera quality of the iPhone vs. Samsung

Picture quality is one of the factors people consider when buying phones. Gone are the days when people relied heavily on photographers to capture memorable moments in their lives.

So, you can see that the Samsung Galaxy S20 Ultra outclassed the iPhone 11 Pro Max in the aspect of camera specifications. Additionally, the rear camera setup of the Pro Max is a triple camera while the S20 is Quad.

Video quality of iPhone vs. Samsung

The video quality of the iPhone and Samsung is another aspect you need to consider. The iPhone 11 Pro Max is up to 4K UHD, which is quite impressive. But the Samsung S20 did better in this department.

The S20 Ultra’s video recording is up to 8K UHD, 4K higher than Apple’s flagship product.

So, when it comes to the quality of videos, Samsung is king!

The storage capacity of the iPhone vs. Samsung

The iPhone users have long been battling the issue of storage capacity on their devices. That’s because the iPhones doesn’t encourage storage expansion. No micro SD cards either. Nevertheless, the iPhone 11 Pro Max offers 512 GB of internal storage space.

Also, Apple sells Lightning ports to SD cards, which enable the transfer of data from an existing SD card into your device.

For the Samsung Galaxy, once you have a Micro SD card on your phone, you can expand its memory space. Also, you can exchange music, pictures, or data with other Micro SD compatible devices.

Operating System of the iPhones vs. Samsung

Apple’s iPhones use the iOS operating system. Apple owns the iOS, and this gives the company full control over security and makes updating the device a breeze for users. This feature also gives Apple a point higher than Google’s Android operation system.

However, Samsung incorporated the use of ‘One IU,’ an operating system that serves as a skin overlay to Android, which is a massive improvement.

Universal chargers, such as the USB chargers, are the standard chargers most devices, including Android devices, are using. Some use the USB-C while others use the Micro USB.

So, what then can you use to charge an iPhone? All Apple products use the lightning cable. It is a charger specially designed for them. The USB-C is by far the most budget-friendly and easy to find chargers, unlike the lighting cables.

The battery of the iPhone vs. Samsung

The price tag on Apple and Samsung’s flagship products varies slightly. The iPhone wins in this department. While the iPhone 11 Pro Max price ranges from US$999 to US$1099, the Samsung Galaxy S20 Ultra cost US$1399.

However, given the features of the Samsung Galaxy S20 Ultra, one may be forced to conclude that its base price point isn’t a deal-breaker.

Now, the iPhone vs. Samsung, which do you think is better? Before you decide, make sure you consider the various features of both phones, not just one. Apple and Samsung are reputable companies, and they produce reliable phones. Thus, both devices are quite reliable and durable.

Also, you can expect their latest releases to be a slight upgrade of their current flagship product. In other words, don’t be surprised to find the next iPhone overtake the Samsung Galaxy It has always been like that since the beginning.

How To UICC Unlock Without Sprint