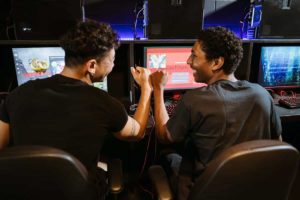 Video games with morality choices are a tough call for me. I wrote a piece a while ago about morality in gaming, basically adopting the stance that when I play a video game that involves choosing between doing the good thing versus the callous, cold, evil thing, I’m almost always going to go for the righteous choice as I can’t deal with virtual manifestations judging me and telling me how disappointed they are in my actions, despite their lack of physical existence.

I then theorised (as I continue to do) that when people play morality-based video games, unless there’s an external factor present, people use their character(s) or avatar as an extension of their own morality. They make the virtual being they control an arbiter of their own personality and imbue them with some moral code that they have, rather than taking an ethical holiday and screwing over innocent, good-natured people for their own gain (virtual people, but people nonetheless).

This caused me to pursue as much good Karma as possible in the Fallout games, always looking to resolve conflict with words rather than a nuclear warhead. I used my own money to finance the saving of the world in Fable 3, refusing to let the people of the land foot the bill for the upcoming war. At the end of GTA V, the choice to betray Michael or Trevor wasn’t even an option I had to let my prefrontal cortex deal with, Deathwish was obviously the right answer.

The Revelation Of Arthur Morgan

Opting for positive morality and reputation has been something I’ve dealt with in video games ever since I started playing them. The Telltale series of The Walking Dead actually made me feel genuinely uncomfortable as you’re unable to save everyone or have to choose what people have less/more, causing members of your group to have less than opaque disdain for you. After playing that around 2014, I eventually got over it and came to terms with my fellow party members’ hatred of me sometime last week.

However, upon playing Red Dead Redemption 2 and donning the spurs of Arthur Morgan, it affected me in a way I didn’t see coming or even acknowledge until recently (a quick warning, spoilers for Red Dead 2 ahead).

I adopted a play style of high honour in Red Dead 2 as I normally would, helping random characters where I could, donating money, and trying to make the lives of the people of New Austin that little bit less miserable. The Bandit challenges were something I struggled with, having to put my internal cringe to the wayside in the name of gamerscore and achievements.

And while there’s nothing you can do to stop the inevitable demise of Mr. Morgan, the way he carried himself was not as some holier than thou, saviour of the masses, refusing to preach of his good deeds or showcase himself as the shining example of how people in the world should be.

In fact, it was just the opposite.

Morgan sees himself as a man who is in deep moral debt to some higher power, the game playing out its titular redemption in more ways than one, and the game certainly seems to encourage one to take the high road rather than the low one, a place that leads to almost certainly leads to a long spiritual stay in a place covered in fire and brimstone.

Get To The Point

That’s all well and good you might say, but where am I even going with this? Well, Morgan’s pursuit of purity and, to be more on the nose about it, redemption is something that hit me like a tonne of bricks. Even though he’s not real (I’m not some kind of maniac, I understand he’s fictional), his manner, demeanor and personality (all of which are masterfully given life by his portrayer Roger Clark) with his reluctance to accept praise was something that aligned with my own beliefs rather starkly.

Now I am not for one minute saying that I am some kind of bastion of good will or someone who deserves any kind of recognition for their noble intentions. That would be plain arrogant and pompous. If anything, I categorically don’t want that.

I want to do good, and I couldn’t care less about plaudits or namechecks or anything of that nature, and I feel that’s what Arthur Morgan aspires to do as well (Arthur however has done a lot worse things than myself, I’ve never robbed a train for instance).

While now this motive or notion of how to live in the real world has only of late arrived as an epiphany of sorts to myself, I think it’s exemplified in Red Dead 2 and Arthur Morgan. He’s the most human character Rockstar have ever created. Flawed. Damaged. Vulnerable. Afraid.

This revelation of how much I admired Arthur Morgan despite him being a neat stack of pixels made me take stock (along with a handful of other influences) and set out to live my life in the most honourable way possible (within reason). To do the right thing, to go the extra mile, to aid those in a time of crisis.

This Is Getting A Bit Heavy

I understand that making such a drastic revelation from a video game is a little bit heavy handed, and some people may say that I should either A) dial it down a bit or B) get a grip. Both of which are equally valid points.

However, I feel like while this is both a substantial yearning and prospect to want to frame your life in such a way as well as it coming from something as trivial as a video game, to me this is only something that’s added positives to my life in a multitude of ways.

I had a fantastic experience playing the video game, and it had the added effect of inspiring me to demand a higher standard of myself, making me aspire to do more for those around me. And I only see that as a good thing.

The Moral Of The Story

With all that now said and done, I’d like to loop back round and ask the question of you, the reader; do you project your morality onto the characters you play, or do you throw your moral compass to the wind and ruin the days of all those that have the misfortune to cross your path? Or have you ever been affected by a video game in such a way, or do I have too much time on my hands?

I fear I’ve now said too much, and I’m fast approaching the city of ranting as I chug down the highway of the speech with my keyboard to the metal, so I bid you adieu before I outstay my written welcome.

Why Is It Important To Find The Right Basement Waterproofing Professional?