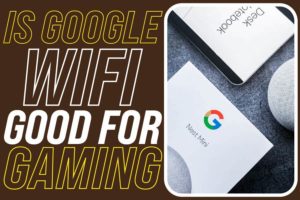 In the modern world, good internet connectivity is essential to carry out your daily activities like online streaming and even more demanding tasks like video conferencing and gaming.

Gaming requires a stable network with high performance, which does not often buffer; that is why you need Google Wi-Fi.

Google Wi-Fi is a mesh network router system first introduced in 2016 by Google. It allows you to connect a modem to it and then spreads the internet coverage and increases speed from room to room.

When gaming, you need a system that prioritizes gaming over other devices. When the network requirement is not met, or there is slow internet connectivity, the game freezes or even locks up; hence network stability should always be good. So,

Is Google Wi-Fi good for gaming?

Yes. Google Wi-Fi is good for gaming because it allows you to enable gaming preferred mode, a feature that gives priority to your gaming device over other devices. This feature ensures that even though many people use the same router as you, your internet speed does not lag when playing.

You need a mobile device and Google account to set up and manage Google Wi-Fi. There are two ways of setting up the Wi-Fi; using the Google Home App or the Google Wi-Fi App.

Both methods are efficient, regardless of what method you choose. Using the google home app involves the following steps;

A while ago, Google Wi-Fi was the original app used to set up Google Wi-Fi. The method is still efficient, and you can use it anytime you wish the set up the network. The steps involved in this method are;

Google Wi-Fi has a good range and performance, making it suitable for gaming devices.

Google Wi-Fi offers you a throughput maximum of 464.4 Mbps, which is impressive considering its affordability.

A newer version of Google Wi-Fi, such as the Google Nest, introduced in 2020, offers you a maximum throughput of 653.2 Mbps.

In terms of range, Google Wi-Fi offers to cover a large area of about 1500 sq ft for a single router and for 2-pack and 3-pack routers. The coverage increases to 3000 sq ft and 4500 sq ft, respectively.

Nobody likes an insecure internet system. Therefore, when looking for a router, security should always be a factor that tops your mind.

And Google Wi-Fi offers just that. Google Wi-Fi uses a module that encrypts traffic in the network and verifies your firmware installations and protects your network.

This is because the system offers increased parental controls such as filtering content, setting time outs, and even disconnecting devices for schedules such as bedtime and homework.

Google Wi-Fi retails at a very pocket-friendly price which is affordable to most people. On google store, Google Wi-Fi is sold at $99 if you’re buying one unit.

For three interchangeable units, you will get it at $149. In 2020, the original google Wi-Fi was re-issued with minor changes.

The changes include its connector that changed to barrel connector from a USB-C and the logo G replaced from a sticker to the letter molded on the housing plastic of the device. The newer and older versions of Google Wi-Fi are available on Amazon at affordable prices.

In addition, google Wi-Fi has two Ethernet ports that enable you to connect your modem to a hub or even attach devices to the mesh network and various points in the house.

Another outstanding feature of Google Wi-Fi is the ease of setup, which requires you to install the google Wi-Fi or google home app and customize the settings as per your preference. This feature allows you to prioritize gaming over other devices.

The most crucial factor you should consider when buying a router is its speed. Gaming requires very fast speed; otherwise, it will lock up. Google Wi-Fi uses Wi-Fi 5 standards. This feature offers a lightning-speed internet connection.

When buying Google Wi-Fi, compatibility with other devices is an important thing to look at. Google Wi-Fi enables two ethernet ports that allow you to connect all wire devices in your home very easily with many wires and cables all over the house.

Google Wi-Fi is crossover compatible. This means that you can connect Google Wi-Fi and Nest Wi-Fi to expand coverage and speed.

In addition, google Wi-Fi has a bridge mode, a feature that allows connected devices to be part of the network in existence.

The original version of Google Wi-Fi does not allow content filtering. However, newer versions such as the Google Nest Wi-Fi can filter content.

Dynamic DNS, a feature that allows you to set your internet address to a name that you cannot remember easily, is not supported by Google Wi-Fi.

DDNS is essential when running an online service, thus a significant disadvantage when the system does not support it.

Another factor that downsides Google Wi-Fi is the fact that the Wi-Fi only has one LAN port. If there is a need to add more people to your network, you have to buy a switch.

The other shortcoming associated with Google Wi-Fi is signal loss. The result of wirelessly extending a Wi-Fi signal is signal loss of up to 50%. The idea of receiving Wi-Fi then rebroadcasting is responsible for the losses.

In a situation whereby you decide to use two units of Google Wi-Fi, the satellite unit-connected devices require twice the amount of time taken by a device connected to the main router to receive the same data. More units are involved, the slower the system is bound to get.

Some advanced features are disabled

As much as Google Wi-Fi allows you to connect to an existing device, advanced features such as port forwarding are disabled.

The other disadvantage associated with this is the inability of devices connected to communicate.

Hence, you might not be able to beam your phone to Chromecast, among other devices. To set up and manage your Google Wi-Fi, you will need a mobile device and an active google account.

When it comes to gaming, google Wi-Fi is good. It is one of the best mesh routers based on reliability and efficiency. Google Wi-Fi has a feature that enables you to prioritize gaming over other devices, making it most suitable for its work.

Although Google Wi-Fi has its shortcomings and does not have the latest Wi-Fi standards, its speed remains unmatched. The unique features and advantages of Google Wi-Fi outweigh the disadvantages. Therefore, when looking for a router to improve your gaming experience, google Wi-Fi should always top the list.

The Best Resorts In Tucson

The Best Features To Look For In Onboarding Software