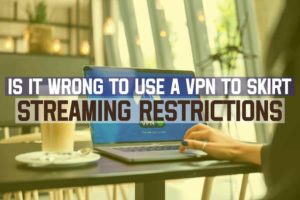 We all know that if one wants to unlock movies and TV shows available in other countries, a VPN is a must.

But one main question that consistently lingers in consumers’ minds is whether it’s illegal to use VPN to skirt streaming restrictions.

There are many ethical issues when it comes to going around the restrictions.

And while VPN seems to be the rescuer to those who want secure and anonymous connections, not everyone seems to be for the VPNs. There is a great controversy as those using VPN says they do so to protect their privacy, while Netflix arguable say its pirating content.

It is not illegal to use a VPN as long as you live in a country where VPNs are legal.

And while it’s not illegal to use a VPN, using a free one to skirt streaming restrictions is extremely risky. It’s also illegal to use VPN to pirate copyright content, use dark web marketplaces transactions, or even hack someone.

Netflix is good at checking whether your address has some connections with a VPN, and once it detects, it blocks your IP address. No worries, even if your IP address is blocked, you won’t lose your Netflix account. Nor will you be termed a criminal.

Netflix is one tough streaming platform that blocks almost every VPN, and you can only use a solid VPN to unblock Netflix content.

Let’s say you are looking for something new on Netflix and can’t find it. You can only use the VPN that defeats content restrictions. ExpressVPN proves to be the best VPN for watching Netflix to explore content outside your region.

Netflix only tries to honor the contractual agreement with its partners. And in this process, Netflix consumers try to skirt the restrictions with the use of VPNs. If you need to unblock content, it would be far much better to use a paid VPN.

Consumers fool Netflix that they are in a country where Netflix is accessible. This way, they gain access to Netflix movies and shows that are not available worldwide.

If you have ever tried to use a weak VPN, you may have noticed that Netflix automatically blocks your VPN connections.

Netflix seems to be coming up with more advanced ways to detect VPNs and stop consumers from skirting geo-restrictions.

That’s why it’s wise to choose a reliable VPN. Most people turn to ExpressVPN, NordVPN or SurfsharkVPN. These are the best VPNs that keep on being updated, making it hard for Netflix to detect the IP address associated with such VPNs.

Netflix will continue scaling its copyright agreements until otherwise. One main factor is that Netflix has been able to develop its own content to give its subscribers a chance to view its originals, movies and shows. With this, the move to crack down on the usage of VPNs continues to be immense.

Another way that Netflix detects the use of VPN is using DNS (Domain Name Server) settings. Netflix can detect a mismatch between your connections, and once this happens, it detects you are using A VPN.

Depending on the VPN you’re using, you will have the chance to access Netflix services from another location.

Doing so means you are violating Netflix terms of agreement. But this doesn’t mean you can go to jail. The only hitch back is that you will be blocked from accessing Netflix if it detects you are using a VPN. With a reliable VPN, this should not be an issue.

What If Netflix Block You From Using A VPN

If you purchased a VPN, logged in to skirt around the restrictions to watch your favorites, but received an error message, I bet you must have been extremely disappointed.

Fortunately, you have a way to go around this to beat your Netflix VPN block.It could be that you’re using a free VPN or purchased a cheap one.

Here is what to do;

Check whether you have permission from the local network administrator. If there is, you may use VPN cloaking- where you hide OpenVPN traffic from deep packet inspection techniques. It’s one of the trusted ways to bypass VPN blocks.

But if there is no restriction from the local network administrator, it could be something else blocking your access to Netflix.

If you cannot follow the troubleshooting guide, it will do no harm to contact your VPN support provider. They can suggest what to use as they sort you out.

3. Check whether you have outdated VPN software and browser

While most VPNs work without any hitches, having outdated VPN software could be one reason you’re not getting connected.

You should update the VPN software often. This is one way to eliminate bugs and improve the performance of your VPN. Also, you can set an automatic update for the VPN or check updates in the VPN menu.

Again,you need an up to date browser. Having a VPN supported browser would help. If you have trouble with your VPN, check whether you have the latest browser updates installed.

If the problem persists, you can check on your VPN tunnelling protocol. That allows data to be securely sent and received between two networks, one best is the OpenVPN.

With the above, you should be able to access Netflix content even if it’s not available in your country.

Why It’s Important To Have Life Insurance

It’s Game Day: Essentials For Watching The Game With Friends And Family

How Car Drivers Can Reduce Their Risk Of Being In An Accident With A...

How To Change The Needle On A Singer Sewing Machine