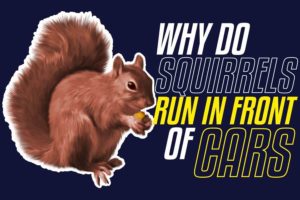 The squirrels are rodents, and they mostly live in burrows and on trees. The squirrel is usually active and extraordinary compared to other rodents.

The rodents tend to move from one place to another quickly. If you drive a car across the woods, it’s common to interact with the squirrels.

Primarily, drivers interact with Eastern Gray squirrels; they poise in the middle of the road, still, and then run back and forward again.

More to the point, why do squirrels have this odd behavior? Is it their sort of sick game? This article is a detailed explanation of the question.

Why Do Squirrels Run In front of Cars?

The squirrels see the fast-moving and loud car as a threat and instinctually standstill as a way of blending with the surroundings or hiding. However, they decide to dart out when they realize that hiding isn’t helpful.

The squirrels have been living with humans for quite a long, but still aren’t used to the cars and consider them predators.

As mentioned, squirrels are used to running in front of their predators; they think the car is also a predator.

Therefore the squirrels think they can save themselves by standing in front of the cars. These rodents are used to freezing when they see a predator in the area. It makes them unnoticeable to predators like eagles, owls, hawks, etc.

However, they do not know that stopping in front of a car is fatal. However, whatever the reasons, squirrels running in front of vehicles are dangerous.

It’s also common to see squirrels make zigzag runs; they use it to throw off hawks swooping for them as a meal.

The squirrels have done the maneuver for years, and it has helped them escape predators and birds of prey. Today the autos are in the picture, and the zigzag runs cannot throw off an approaching vehicle.

How To Avoid Collision With Squirrels

It’s the role of humans to avoid squirrel accidents. It’s because we can’t teach or instruct squirrels not to run in front of vehicles. The only option here is safe driving, which will help minimize collisions with the squirrels.

The squirrel collisions are usually rampant during summer. At this time, squirrels are active since it’s their breeding time. They gather food for the young ones and themselves.

It’s because, during winters, the rodents hibernate and tend to eat food they have collected during summer. Therefore collisions during winter are usually relatively low.

You should know that squirrels come out for food in the morning when the sun rises and evening during sunsets. So, when driving at that time, you need to be cautious, which will help save this rodent.

Can A Squirrel Survive If Hit By A Car?

But after hitting a squirrel, some play dead but get up after they instinctually feel there is no danger.

The squirrel can also survive if hit by the car, and the injury is not severe. If it has a strong immune, then it can surely cure itself. However, if the damage is severe, the survival chances are pretty low.

What To Do If You Hit An Animal With A Car

Accidents are upsetting and traumatizing, even if it involves a squirrel. But you need to know that accidents are difficult to avoid. However, you can take steps to help reduce and prevent animal accidents.

If you happen to hit an animal, it’s best to call the authorities for help despite all the efforts not to. The management will help get the animal to a wildlife rehabilitation center or veterinarian.

How To Avoid Animal Accidents

Some accidents are usually inevitable such as those including squirrels. The squirrels have the habit of dashing out from underneath the car before you notice you’ve already run past them. However, you can take steps to help you avoid accidents with animals.

Wild animals such as squirrels, deer, etc., mostly come out during dawn or dusk. Therefore you need to be cautious when driving on the road at this time.

Be alert on wood-lined roads

When driving on a road that has woods on either side, the probability of running into wildlife is high. Therefore you need to operate at a slow speed in such parts.

Be constantly alert when driving

Distracted driving is usually so dangerous to both humans and animals. It would help if you were alert and had all eyes on the road to avoid hitting animals.

Slow down when passing parked vehicles

Pets like cats and other small wild animals shelter under parked cars. The sound of your vehicle might scare them from the car and make them quickly run to the streets. Therefore you might run over them in the process.

Watch out for deer signs

Accidents involving deer can be detrimental to both deer and humans and lead to severe damages. The deer are larger animals and will lead to more severe accidents.

Therefore you need to be keen and watch out for the deer warning sign and keep to the speed on the sign. As mentioned, deer are mostly on the road either early in the morning or late in the evening.

You should follow the posted speed limits and more so in areas that have wildlife.

When you notice an animal on the road, the best thing to do is honk and brake. However, swerving is usually instinctual but is dangerous. It might make you lose control of the vehicle and even end up hitting the animal anyway.

Using the horn would help; the noise will warn or scare off the animal and alert other drivers.

It’s the best thing to do if you are in a collision with a deer or large animal. So, if the impact with the animal is inevitable, and you do not want to damage your car’s body, accelerate.

If you hit the brake, the deer might end up on your car’s windshield. Therefore in such a situation, hit the gas so that your front end rises slightly up; this will give you the best chance to hit the deer with your car’s bumper.

What To Do After Hitting An Animal

After hitting an animal, you will surely be upset and worried. The animal might be dead or seriously injured, your car might have severe damages, and you might also have injuries. Here are some of the things to do in such situations.

It is the first and essential thing to do when you hit an animal, and it’s injured. You need to stop and check on animals, plus assess the whole scene.

After an accident, you will be terrified and lose focus; therefore, you won’t be alert for other cars.

However, you need to be alert, turn on emergency lights, or you can use flares if you have any. Be aware of other vehicles on the road before alighting from the car.

As you approach the animal, you need to be aware of other cars and be very cautious of the animal.

If the animal is not severely hurt and looks scared, it might lash at you. Check for its tag and call the owner if it’s a pet.

Animals such as deer move off the road and can indeed survive, so you should leave them alone. However, if you’ve hit animals such as a mountain lion, bear, or other dangerous predators, do not get out of your vehicle. Call the authorities.

Do not move the animal if it’s not safe

You should only move the animal if it’s on the road to a safe place. Ensure the animal is docile enough to handle.

Use a blanket or piece of cloth when touching an injured animal; it’s for the animal’s comfort and your protection. But it’s best just to let the authorities arrive.

Report to the police

Call the police; they will help manage the accident accordingly and inform animal control. If you hit a particular animal in some states, you need to report it to the police.

It’s because they can be hazardous if left on the road and therefore have to be immediately removed.

You won’t have to report certain accidents involving small animals like squirrels, raccoons, etc. But you can also contact the police.

Reach out to your insurance company

If your vehicle has any damages, you can call your insurance company and claim. You will have to share as much information including pictures etc. They will help you back up your claim.

The squirrel’s survival instinct has been with them for a long that the road and autos. The squirrels usually make the majority of the roadside casualties.

The squirrels are pretty interesting to watch, and their feeding is even different from other rodents.

Sadly many young squirrels rarely make it past the first year because of many accidents. However, the best way to limit casualties is by always being cautious while driving.

8 Tips To Organize Your Wedding

How Does Data Recovery Software Work?

What Is The Best Python Library For GUI?

Is All Home Furniture Made The Same?