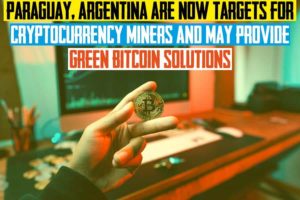 One of the arguments against cryptocurrency is the amount of energy required to mine a bitcoin or an Ethereum. Environmentalists have been on the jugular of bitcoin miners, enthusiasts and preachers on the devastating effects of bitcoin mining on the environment, and at a time when climate change is sweeping through the world, decentralized finance, spearheaded by bitcoin and Ethereum, couldn’t have come at a worse time.

But how bad can it get? How hopeless is the environmental situation that bitcoin mining has to stop?

It depends on which divide you belong: the optimistic divide that believes there are better renewable options that can and should be explored, or on the pessimistic side that believes it will all gloom and doom for the environment, and the human race will melt into liquid if we don’t stop mining bitcoin and other cryptocurrencies. Whichever divide you belong to, the reality is: bitcoin and cryptocurrency are here to stay; there is no going back!

So, what options do we have available to mitigate the effects of bitcoin mining on the environment?

A plethora of options.

One of such options is moving bitcoin mining plants to countries with less carbon monoxide emissions, countries with excess energy to spare and an abundance of renewable energy.

Aside from the fact that it will mean more adoption of bitcoin and cryptocurrencies around the world, which leads to more trading on crypto exchange redot.com the idea opens new opportunities for all.

Of course, it does. That is where countries such as Paraguay and Argentina, and by extension, some countries in Africa, come to the party.

Why Are Bitcoin Miners Looking For New Homes?

Bitcoin mining and its adoption have caused a lot of issues around the world. In 2021, the Chinese government finally, after years of building to the grand moment, banned all forms of cryptocurrency activity in the country. China had been a major hub for bitcoin miners. After the ban, most of these miners and mining companies relocated to other countries while others are thinking of new, uncharted territories to build their mining plants.

Also, in countries such as the United States of America, where most bitcoin miners and mining companies are now based, environmental concerns are being raised. The USA is among the leading countries in the emission of carbon monoxide. In dealing with climate change, there is a need to reduce the number of greenhouse gases that are emitted hence the clamour for less mining in the country.

So, what is next for miners?

The drive to have a more environmentally-friendly decentralized currency system was propelled by Elon Musk, CEO of Tesla, when, after announcing that Tesla would start accepting bitcoin as payment, went back on his words. Musk had earlier gotten $1.5 billion worth of bitcoin, adding it to Tesla’s balance sheet. However, after going back on his words regarding Tesla accepting bitcoin as payment, Musk explained that bitcoin’s mining effect on the environment was the main reason he was stopping Tesla from accepting it as payment.

A Series of meetings were held with Musk concerning the efforts that miners were making to use more renewable sources of energy.

Why Move To Paraguay And Argentina?

Bitcoin mining will not stop, not now, not soon. As some nations are cracking down on miners and banning cryptocurrency-related activities, others, like El-Salvador that made bitcoin an official currency, are embracing the gospel of cryptocurrency.

And of these countries leading the way in bitcoin and cryptocurrency adoption are Argentina and Paraguay, two South American countries with more energy they can use.

In the early months of 2021, there were reports that some Chinese mining companies were making enquiries on the possibility of setting up mining facilities in Paraguay. It was as though these companies were preparing for the worst, which struck in September of 2021, the Chinese government outrightly banned every form of bitcoin or cryptocurrency-related activities, ranging from trading on redot.com to mining bitcoin.

In addition to the need to relocate from mining hot zones such as China, Paraguay and Argentina are good mining grounds.

Paraguay, they have more energy than they can use. The country produces 60,000 GWh per year, and all from renewable energy.

The renewable energy part is amazing, isn’t it?

But there is more!

In 2018, activities, of the power generated in Paraguay was used, leaving 65% to waste. That is a lot of power wastage!

Well, Paraguay exports some of its power. In 2017, the exported power was worth 2.1 United States Dollars, and this represented 7.1% of the country’s GDP.

Now, with all of these considered, alongside the low, and the almost insignificant hash rate of Paraguay, which is estimated to be around 0.18%, it is common sense for miners to seek to build their mining plants and factories in Paraguay.

And the interesting part is that politicians in the country are very welcoming of the idea.

With bitcoin mining plants in Paraguay, the amount that will be generated from taxes will be massive. And then there are the job opportunities for locals and the other ripple effects of bitcoin, cryptocurrency and decentralized finance on the economy and the country at large.

For Argentina, the factors are somewhat similar. Argentina has a hash rate of 0.05%. The energy situation in the country makes it, in the words of Infobae’s CEO Hunang Shanchun, “a country with good mining potential.”

Some parts of Argentina, specifically the Tierra Del Fuego region, are perfect locations for mining farms because of their low temperatures. Low temperatures help the mining rigs to stay cool for long, making the use of supplementary freezers and freezing equipment of no use. More than good enough reasons to move to Argentina.

What Is Next For Miners?

The lure to move to Paraguay and Argentina will open up more developing countries with a conducive mining environment to the idea of bitcoin mining as a form of economic expansion and growth. As the cryptocurrency, blockchain technology and decentralized finance train continue to move through the world, we will find solutions to hurdles that pop up. It won’t be easy, agreed, but decentralized finance is here to stay!

How To Save Money On Prescription Drugs