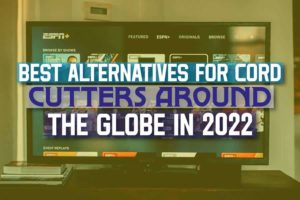 Looking to take the much-needed leap from cable to streaming? This is the article for you. Nowadays, we see the best of entertainment of streaming services as they continue to lure in production houses, casts, directors, etc. It is only a matter of time that everybody migrates to streaming services. To make sure you’re well equipped to cut the cord, we need to talk about your options.

When it comes to streaming services, Netflix is the giant of the industry. If you look at the library of new shows and movies on Netflix, you’ll find an unlimited amount of content to stream. But more services are constantly growing and becoming the best of the industry. To make sure your cable TV needs are met through a streaming service, we need to point out the obvious features of cable TV like:

We can’t decide what is best for you, since everybody’s preference varies. But not to worry, each alternative’s key factors, including pros and cons, will be shared for you to make the right decision. Let’s dive into the list of best alternatives for cord-cutters around the globe in 2022.

This is the best pick of the bunch because of its economics and features. Hulu Live TV combines the power of the Video on Demand (VOS) service and has Live TV streaming. The live TV feature comes at a price of $64.99/month and Hulu’s VOS service comes at $5.99/month. For the no-ads premium version of Hulu, the price goes up to 11.99$.

One con of Hulu Live TV is that it is exclusively for US viewers. If you’re looking to stream Hulu Live TV outside the US, you would need a VPN to bypass the geo-restriction. Other than that, it is a great economic pick and fulfills all your cable needs.

HBO Max can be considered a new competitor in the market, but it has quickly caught up with the other streaming giants. It may be costly ($14.99/month) than Hulu but the range of movies and shows make it worthwhile. It has all the blockbuster releases like Game of Thrones, Chernobyl, House of the Dragons, Sopranos, and many more.

The con of HBO Max is the same as Hulu (region-restricted content). To summarize, it is pricey but delivers a different variety of shows to binge-watch. It does not have Live TV so, if you like to watch TV channels, this may not be an alternative for you.

The default choice in the streaming world will always be Netflix. Not because it was the first, but because of its library of over 16,000+ features, its new releases every single month, and its production that is reeling in more subscribers every month. Netflix is the reason why most have migrated from cable TV. It is a great pick and starts at $9/month.

One con of Netflix is that it does not have Live TV. But it is available globally and some shows are regionally restricted (another excuse to bring out the VPN).

Disney plus is a more exclusive choice that is best for family-friendly watch time. It is a sole VOS service that features Pixar movies, Nat geo documentaries, animated shows, and much more. It does not have Live TV, but it does periodically premiere new series of shows.

Disney Plus is a budget-friendly option like Hulu and its starting price is $6.99/month. It also can be annually subscribed at $69.99/year. We know that it does not have live TV, but instead of that being a con, there is a bundle pack that can be purchased that can fulfill all your cable needs and more.

For just $13.99/month, you can get Hulu, Disney Plus, and ESPN+. This is a great pick for those looking to get an all-in-one form of the streaming experience.

The E-commerce giant came out with its relatively new streaming service Prime Video, and it has everyone hooked. This streaming service can be considered more of an elite choice due to its exclusive productions, good cost, and powerful features.

In 2020, Prime Video introduced the concept of a Watch party that allowed users to stream and simultaneously chat and talk to their friends from different locations. At a time where everyone was socially distancing, this feature made the separation less painful.

The service comes at $5.99/month and extra features cost more. It offers ad-free content in video quality up to 4K. Even its TV channels have gotten a great response and rating and they’re worthy to subscribe to.

The pandemic had already bought havoc on the cinema industry due to closures. Even cable TV started sounding depressing due to the number of death tallies, old reruns, and canceled sporting events. Luckily, people recognized streaming services to be a goldmine of entertainment in this difficult time and using a VPN brought an oomph factor to it.

Also, streaming services became cheaper than cable TV which gave it even more reason to be used. By now, you must’ve decided on a cable-cutting alternative so just pick one, subscribe, and enjoy the best of what the service has to offer. Happy streaming!

Overview Of The Different Types Of Home Warranty Plans

Hashgraph VS Blockchain: A Detailed Comparison