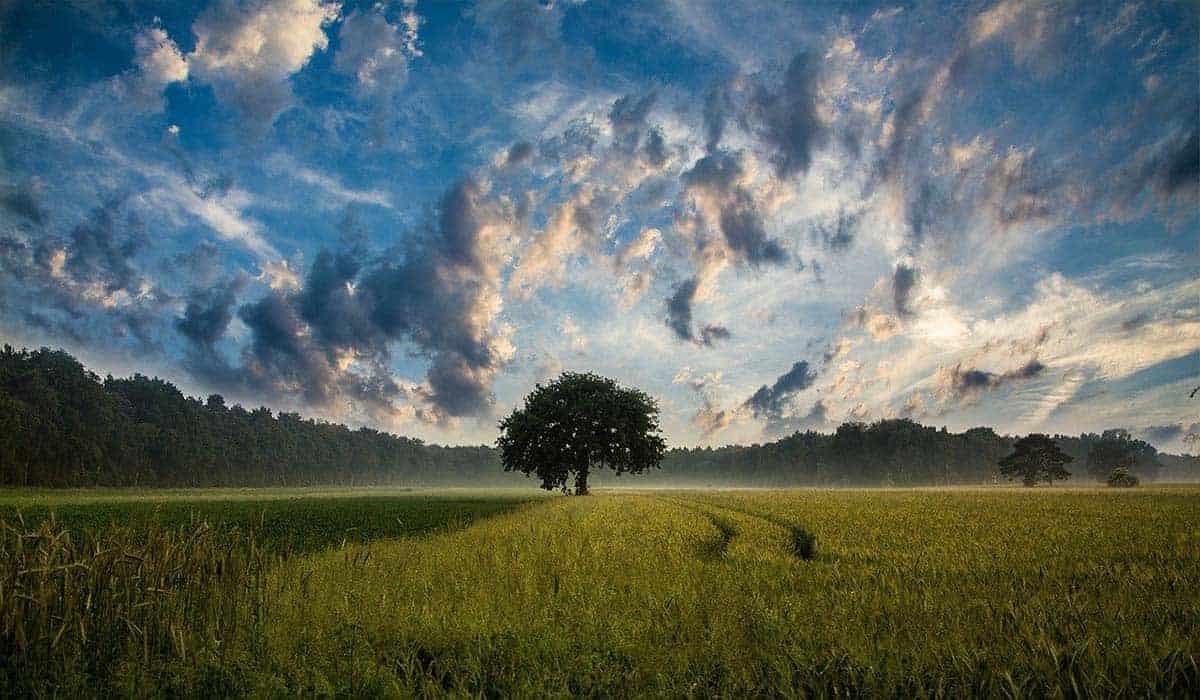 Rain is one of the phenomena in nature that leaves many of us fascinated and wondering how it happens. Right from the elementary school, we are taught how rain is formed and how clouds are saturated before a downpour. For this reason, it is understandable that many people assume that before there can be rain, clouds must be formed first.

But that brings us to the topic of this piece: can it rain without clouds? Well, the simple answer to that is yes. It is going to sound very surprising to some. But rain can fall under various circumstances even without the formation of clouds. This article is going to explain in detail how this is possible at all.

Serein – When Rain Falls From A Cloudless Sky

Once in a while, you might have noticed rain falling from a clear and cloudless sky. While this phenomenon is baffling for some, it actually happens and on a regular basis. In fact, in the field of meteorology, there is a name for it and this name is serein.

This term refers to the rain itself that falls from a very clear sky with no clouds at all. Serein is not heavy by nature. It is a kind of light drizzle and it happens usually in the evenings. It will be interesting to know that the word itself was derived from the French word for cloudless.

For those who are wondering how this is possible, there are explanations for it. Some studies have indicated that this form of rain is due to the evaporation of droplets. Others consider it to be a type of rain that actually emanated from a distant cloud.

In the case where distant clouds are considered, there is often the presence of an intense vertical wind shear between the ground and the cloud. It is this wind shear that makes the sky to be without any cloud and look clear and transparent.

Sunshower – Raining With The Clouds

Considering the fact that many of us link rain to clouds, it is difficult to imagine rain without clouds. But, there are those rare moments where rain falls from what looks like a clear sky with no clouds at all.

Of course, whenever this happens, people are often surprised. They noticed that without any cloud cover, a drizzle springs to life. There is every likelihood that you might have experienced this before. You may be wondering what happened and how it was possible for rain to fall without clouds.

Well, this is a real phenomenon and it even has a name. It is called a sunshower. If you have not heard of it before, that is not a problem. This is because most of the globe is not familiar with the word. This is unless you are from New Zealand. The same applies to those from the United States of America, the United Kingdom and Australia. This is because in these countries, the term sunshower is used.

In other parts of the globe, the phenomenon has been given a series of local names. For instance, in Vietnam, the people refer to it as Mua Bong May. The presence of these local names shows the global occurrence of rain without clouds.

A sunshower is an atmospheric phenomenon where rain falls even as the sun is shining with little or no cloud. For those who are still wondering how this happens, it is not a mystery as there is a logical explanation for it. A sunshower linked with rainbows. This is true if the sun is in proximity to the horizon.

As the raindrops in the line of the sunlight, it becomes easier for refraction to occur. This is what leads to the rainbow effect. There are several explanations for sunshowers. But, there are two theories backed by scientists. These include spreading clouds and the presence of powerful prevailing winds.

The Formation Of Rain

Cloud is a visible collection of small water and ice particles floating above the earth’s surface. Cloud formation depends on the temperature. When the air is warm, it can contain more water vapor. This is in comparison with much colder air. Hence, a way to saturate air is to make it cooler.

Water vapor gets added to atmospheric air in different ways. The first is via the convergence of wind. Another is through precipitation or even evaporation. The evaporation that is being referred to here is the one that occurs during the day from massive bodies of water like seas and oceans. Evaporation can also occur from transpiration from plants.

Water vapor starts to condense around dust, salt, ice, and other particles. These particles are referred to as condensation nuclei and it is around these nuclei that clouds are formed.

As bigger water droplets plunge, the coalescence continues with increasing turbulence. This process continues until the drops are so bulky that they can overcome the force of air resistance on their own. At that stage, they fall onto the earth’s surface as rain.

The process of coalescing usually happens more in clouds that are above freezing. As for clouds that are below freezing, the ice particles also become heavier until they start to fall under their own weight.

As expected, the entire process is dependent on and controlled by temperature. There is a massive temperature difference between the earth’s surface and the cloud. That explains why the ice crystals end up melting and then falling like rain.

After the explanation of the steps of rain formation in the sections above, the next section focuses on the several causes of rain. The primary causes are anthropomorphic (man-made) factors. Others are frontal activity, convection, tropical systems, and orographic factors.

Even though many do not even realize this but human beings contribute a lot to the formation of rainfall. Millions of vehicles and other sources of atmospheric pollution release dust. This is alongside other particles. These particles become the condensation nuclei that trigger the formation of clouds.

As this process continues, more clouds are formed and the likelihood of rain increases. This is why higher incidences of rainfall are connected with the days of the week that have the greatest levels of pollution. In fact, human factors are so pronounced that there is a higher chance of rainfall in cities with a higher population and human activity.

Another way by which rain is formed is through what is referred to as frontal activity. This often results in other forms of precipitation like hail. It is a function of cold and warm fronts. It is the interaction of these fronts that result in rain.

Convection rain is the type of rain that is from convective clouds. They often have a short duration and also are limited in the areas covered. They are common in tropical areas and known for being intense but not long-lasting.

In the tropical parts of the world, rainfall is constant during certain parts of the year. These parts of the year are collectively known as the rainy season. In some cases, the rainfall can be so heavy that they are termed tropical cyclones. These are actually huge air masses spanning hundreds of kilometers in length.

These air masses have low pressure in the middle and winds blow towards the center in a direction. The direction is determined by its location in either the northern or southern hemisphere. Atmospheric systems in the tropical regions of the globe are responsible for the heavy precipitation. The same goes for other various forms of rain.

This will be interesting for those who are familiar with the subject of geography. Orographic in this context has to do with mountains or the topography of a particular area. Precipitation based on orographic factors happens on the windward side of ranges (mountain ranges). It is triggered when there is an uplift of moist air across the side of a mountain. This movement leads to cooling and condensation which then leads to rain.

An Ultimate Guide For Beginners Of Bitcoin Trading!