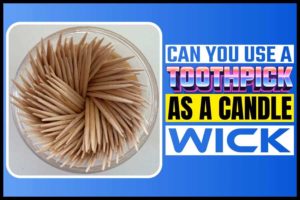 Candles are a good source of light, and they have a lot of significance to most people. Whether for romance or spirituality, most people feel better when lit candles surround them.

Most relaxation retreats use candlelight because of how comforting it is. One of the most important parts of the candle is the wick since it works alongside the wax to keep the flame burning.

A wick without the wax would burn in seconds, and wax on its own will not burn, so let us take a deeper look into options for a candle wick;

Can You Use A Toothpick As A Candle Wick?

Yes, you can use a toothpick as a candle wick since it is wood and can burn. Toothpicks are short, so they won’t work for most candles, and it’s a good substitute for when your wick is covered in wax.

You can use something longer like a skewer or chopsticks since they are longer, and you can make a bigger candle with them.

Making the right candle wick is a big part of making a candle, and if you miss out on this aspect, your candle will not work the way you need it to.

To understand why a wick is so important, we need to take a look at the specifics of how it works, so let’s get into it;

When using a candle, the first thing you do is light the candle wick. The wick burns on its own for a few seconds and starts to melt the wax below it. This wax will become a pool of liquid wax, effectively called a melt pool.

Liquids form a layer at their top surface, and this layer moves to accommodate changes on the liquid surface; this surface tension is one of the concepts used in burning candles. The molten wax moves up the wick towards the flame through capillarity.

When you put a straw in a bowl of water, you will notice the water rises higher in the straw than in the bowl.

This concept is similar to a wick and molten wax; the wax rises, so the flame burns above the solid wax and molten pool.

The correct wick will keep the flame high enough to sustain a melt pool while ensuring it doesn’t melt the rest of the candle. If the flame is too close and too hot, the wax will melt more, and the candle will burn faster.

The amount of wax drawn through depends on the wax properties and type of wick in use. Some waxes are harder to get through the wick; thus, the flame will not be as bright. Lighter wax blends move up faster in the wick, and they produce more light.

The molten wax moves up in the wick and soaks it until it gets to the flame. The wax sits in the wick as a liquid until the flame burns the molten wax into a vapor. This vapor ignites and mostly burns at the wick, which is why the wick burns with the candle.

If you have the right wick, it will hold enough wax in it to not burn too early. If a wick pulls in too much wax, the flame will be huge and a potential fire hazard that you sound not have in your house.

If the wick doesn’t pull in enough wax, it will not have fuel to burn at the flame; therefore, the light will be dim, and your wick will burn faster than the wax melts. Eventually, it will drown in the melt pool, and your candle will go off.

Selecting the right wick is the most critical aspect of candle making, and it takes a lot of testing. You need to understand why it is important to test your wick to perfect this skill and improve your candles in the future.

You need to go a long way before you get the right wick for your candle design. You will make wicks for specific candle designs, so you need to work the specific wick independently. With making candle wicks, you need to establish a starting point for other candle makers.

If you can figure out the correct wick for your candles, you could quickly make a fortune. This skill is invaluable, and wick design is the hardest aspect of candle making. Of the house you spend learning, 99% of the time will be on the candle wick.

You cannot take a scientific approach in making candle wicks; you can’t get the right wick through scientific calculation, only through trial and error from collected data. As you test each new design, you will build a body of data that will help point you in the right direction.

Working on new candles and getting more feedback will help you figure out which wicks will work best and how to change them to make them perfect.

Making candles at home for home use relieves most of the pressure, but you can strive for perfection anyway.

The wick has the largest responsibility in a candle since it regulates the temperature of the melt pool, the size of the flame, the rate of wax melting, and combustion. The wick plays so many roles; it is easy to pick the wrong wick.

Burn testing for candles is mostly about the wick rather than the wax. Typically, you will make changes on the wick and use the same wax.

Changes in the wick make a bigger impact on a candle than anything else, so you have to give it the most attention.

What To Consider When Making A Candle Wick

There are some vital aspects you need to look at when creating a wick to make sure you get the best wick so lest get into it;

A candle needs to have a constant-sized flame, and only the wick can deliver this. An inconsistency in the flame size could make the candle dangerous to use, especially in the house.

You have to make sure the wick holds a specific size and material concentration throughout, not changing as it burns.

If it burns too fast, the melt pool could extinguish the flame, and it will be a hassle turning it on and off.

The smoke the wick gives off

Most people use candles instead of other carbon-based light sources because they don’t produce smoke.

You need to maintain this aspect in your candles; otherwise, your customers will not appreciate them.

You need to pay attention to the wick’s material to ensure it doesn’t have any components that will make it smoky.

Impurities in the candle often cause smoke, so you must use high-quality wax and products in the wick.

It would help if you considered the temperature at which the wick burns since it will affect the container, wax, and use environment.

If the wick burns too hot, it will melt the wax faster than it can burn it, and eventually, it will go out.

A hot flame will also heat the container and could make it uncomfortable or dangerous to move.

The wick should consist of materials that make it burn at a comfortable temperature to prevent accidents.

The wick controls how fast the candle burns, so you need to get the right one lest you won’t be able to manage the melt pool.

If a candle wick burns too hot, it will melt the wax faster than it can burn it; therefore, it will drop off to the sides and make a mess.

A temporary solution would be to put the candle in a container, but this will not be a big help since the wick will collapse eventually.

Minimal glow after putting out

It would help if you had a candle that goes off as soon as you blow it out to make it more convenient for the users. The wick should not glow for too long after being blown out.

The longer a wick glows, the more smoke it produces; therefore, you need to control the glow to minimize smoke after blowing out the candles.

You can use a toothpick as a candle wick if you need to, but the candle size you can make will be limited.

A small candle will work well with the height of a toothpick, but you might need a bigger skewer or chopsticks to make the candle bigger.

When making a wick, you need to ensure it is designed properly to produce a good, consistent flame to melt the wax.

If the flame is too hot, it will burn through the wax and could cause a fire. Make sure the candle isn’t smoky since it will make the user uncomfortable.

Dental Amalgam Fillings: What You Need To Know

Tips For Saving Your Money From Side Jobs

5 Practical Everyday Uses Of VPNs You Should Know

Types Of Birth Injuries To Keep An Eye Out For