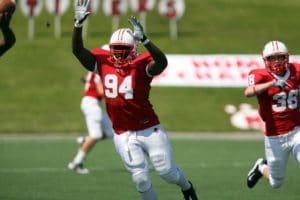 Team sports are some of the most popular sports because of their demanding and complex nature.

These sports need the players to communicate with each other constantly to plan moves and execute them as needed for most of the game.

Rugby and football have a lot of communication, but it is direct between players since they are relatively close to one another.

This is not the case for American football since some players are far apart during the game, yet they need to get the ball; how do they do it?

Do Football Players Have Microphones In Their Helmets?

The radios are also crucial for communication between the sideline and the players to create game strategies. Players on the field don’t have microphones in their helmets, only speakers to hear the coaches, but they can’t talk to the coach.

Yes, football players have radios in their helmets but not all. The NFL often has microphones on the players on the bench to record their sounds and add them to the recordings where appropriate.

You must have noticed the green sticker on Tom Brady’s helmet; this means he has a microphone in his helmet. Not only Tom Brady gets this advantage; every team has space for microphones.

This means that Quarterbacks 1, 2, and 3 have helmets with radios to help them during the offense.

During the defense, the linebackers and maybe the safety might have one, but only one can be on the field and use the speaker at any time.

The coach to player radio system allows a technical bench member or coaching staff to communicate to a designated player from the bench area through the speaker. The NFL strictly prohibits communication for the coaches’ booth through this system.

The communication starts after the game official signals the game down. The NFL will manually cut off this link once the play clock gets to 15 seconds or after snapping the ball. This makes sure that the coach doesn’t talk to the players during the game.

Origins Of The Quarterback Communication System

The quarterback helmet radios have cleared the way for today’s gadget fest that you witness every Sunday at the sidelines. All the teams now do this, so you must be curious where this came from.

You would be surprised to know that the NFL initially banned the use of radios about half a century ago. Let us look at the history of this simple yet effective communication system;

To explain the history of the radio communication system, we have to go back to 1956 when Paul Brown was the head coach for the Browns during the back-to-back championships. Paul Brown was a legendary coach who was innovative in getting wins.

Two inventors, John Campbell and George Salaries, avid Browns fans, approached Paul with an idea. They told him they had a way to communicate with his quarterback on the field during the game.

Paul Brown was into the idea, and he gave the inventors instructions to create something that would do the job they wanted, in secret.

The two inventors went ahead to build a prototype for a helmet with a receiver, and they went out to test it.

George went into the forest, and John stayed at the radio to communicate. A cop passed nearby, and the interference got to his radio, so he found George in the woods, but he let the story slide since he was also a Browns’ fan.

On game day, the QB for the Browns was George Ratterman, who would become the first player to use a helmet speaker in a game.

The other team got suspicious of the transmission device on their sideline, and inevitably the word got out.

Fast forward to the 90s, after the evolution of the helmet and into modern football, the sport needed a change, and the NFL wanted to change things up.

The helmet radio made it back to the NFL since it made the game significantly quicker. This also saved the time and energy of using a communicator to run into the field or using hand signals. At the start, the systems had many problems, but they improved over time.

At the start, communication was accessible for all, but the league knew they had to change it up to make the game better.

This made them introduce rules to the use of helmet microphones which limit how much the staff can communicate with their players.

If one team’s system goes down, the other team also has to shut their system down so they don’t get an unfair advantage. Whenever you see a player with a green dot on their helmet, it means they have a speaker.

The Real Reason Every NFL Player Wears A Different Helmet

You must have noticed that NFL players use helmets with different designs, making a big deal about it.

Many NFL players are outspoken about what helmets they wear, and some have gone to extreme lengths to keep their helmets.

There is a long tradition of the NLF changing its policies around protective headgear, and the players are almost always resistant.

For instance, Antonio Brown made a big mess in 2017 because of his helmet, and he even went to court to try and get it back.

There are 34 helmet brands that the NFL has approved their players can use since they have gone through intense safety tests.

The basis for players to make this decision has evolved, and most players choose helmets for their ability to keep them safe.

In 2018, the NFL released a new helmet guideline at the beginning of the season; 17% of the NFL players were still using prohibited helmets.

By the end of the season, the number had dropped to 2%, and this process is what the NFL encouraged.

The NFL even put their lab findings on safety tests into a list to help players know which helmets had the best results. The NFL got about 50% of their players to upgrade to safer helmets by providing this information.

The NFL’s attempts to get their players to use the safest helmets did not stop there. Before the 2019 season, a quarter of the players still used helmets that failed safety tests. This made the NFL implement a plan to get the message to its players.

The NFL gave each team a list of all their players using unsafe helmets and their teams. This allowed the player association to reach out to each player individually and discuss safer helmet options.

The goal was to reduce the risk of head injuries during games as much as possible. The truth is, football is a rough sport, and the risk will never be entirely out of the picture.

The NFL findings prove that the new helmets make a significant difference since players with approved helmets had a lower concussion rate.

While this might not seem like something big, players should keep it in mind since it can help them land long-term deals.

A good helmet means fewer injuries; therefore, you will appear as someone that can stay on the field.

Many of the NFL players wear different helmet models with different alterations. They are, however, locked into one or two helmets each season since the teams can wear throwback uniforms, but players have to use their regular helmets.

Players can decorate their helmets however they want, provided their changes don’t compromise the helmet’s safety.

There are rumors that the NFL will loosen the rules a little and lift their one-helmet rule, which would leave more choices for players.

Most players have personal reasons for the helmets they use, but it mostly comes down to safety, comfort, and style.

The players want to feel safe and secure without carrying a heavy, cumbersome helmet that inhibits their performance.

The regulations from the NFL have also had a significant impact on helmets players use since there are only so many legal brands.

The modern-day speakers used in the NFL are a product of two Browns fans with crazy ideas and are now a big part of football. Football is a rough sport, so the NFL takes a lot of steps to manage the helmets their players use.

Streaming Services That Offer The Best Variety Of Movies For Canadians

Why Investing In Quality Tools Saves Money In The Long Run