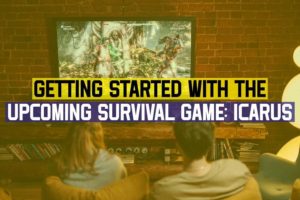 The Future of Survival is a collaborative survival game that has taken the gaming world by storm. Available on STEAM, the game is currently available in beta. The importance of this is that the developers release additional aspects of the game in beta every two weeks. Serious gamers flock to sign up for the pre-order as soon as it becomes available out of fear of missing out. Anyone who pre-orders the latest beta release, will also gain access to the beta weekends that allow access to parts of the game that would otherwise be closed. There is much to know about ICARUS beta, which is why we have put together a quick and easy beginner’s guide at EIP Gaming based upon frequently asked questions.

ICARUS beta can be found in the STEAM store or by going to the official ICARUS beta website. From there, you will be redirected to the game’s STEAM page. Once there, it is in your best interest to pre-order the game. Once you have placed your pre-order, you will then be able to access the closed beta portions of the game.

When you pre-order, you will also gain access to the beta weekends. The beta parts of the game are only available on select weekends and then become available again on Monday evening. The reason for this is that the beta parts of the game are opened up to allow gamers the ability to see what the game has in store for them before the official release in November. It also allows for the developers to work out bugs and discover what new features work well and what needs to be tweaked. It is in your best interest to play as much as you can during a beta weekend so that you can acquire knowledge on the game that you may not otherwise have been able to access.

When Are The Beta Hours Of Play?

Beta weekends are launched on Friday evenings at 5pm PDT and last until 10pm PDT on Sunday evening. Depending on where you live in the world, you may be able to access the game through Sunday evening and into Monday.

What Happens To Progress In Beta?

Gamers from all over the world have been waiting a long time for the official drop of the ICARUS game. To engage gamers while the game is in the final stages of development, the decision was made to introduce aspects of the game via beta in phases. Doing so is marketing genius as it drums up excitement for the game, but it also allows for consumers to get a taste of the new ICARUS game while helping developers understand how the game play is sequenced from a players perspective and work out any kinks or bugs before the official release date. Beta is a great way to experience the latest features for a meager price. Doing so has never put a player behind in their game play and many find that beta weekends help them to freshen up on their game playing skills and get ready for the serious competition that will endure upon the official game release date.