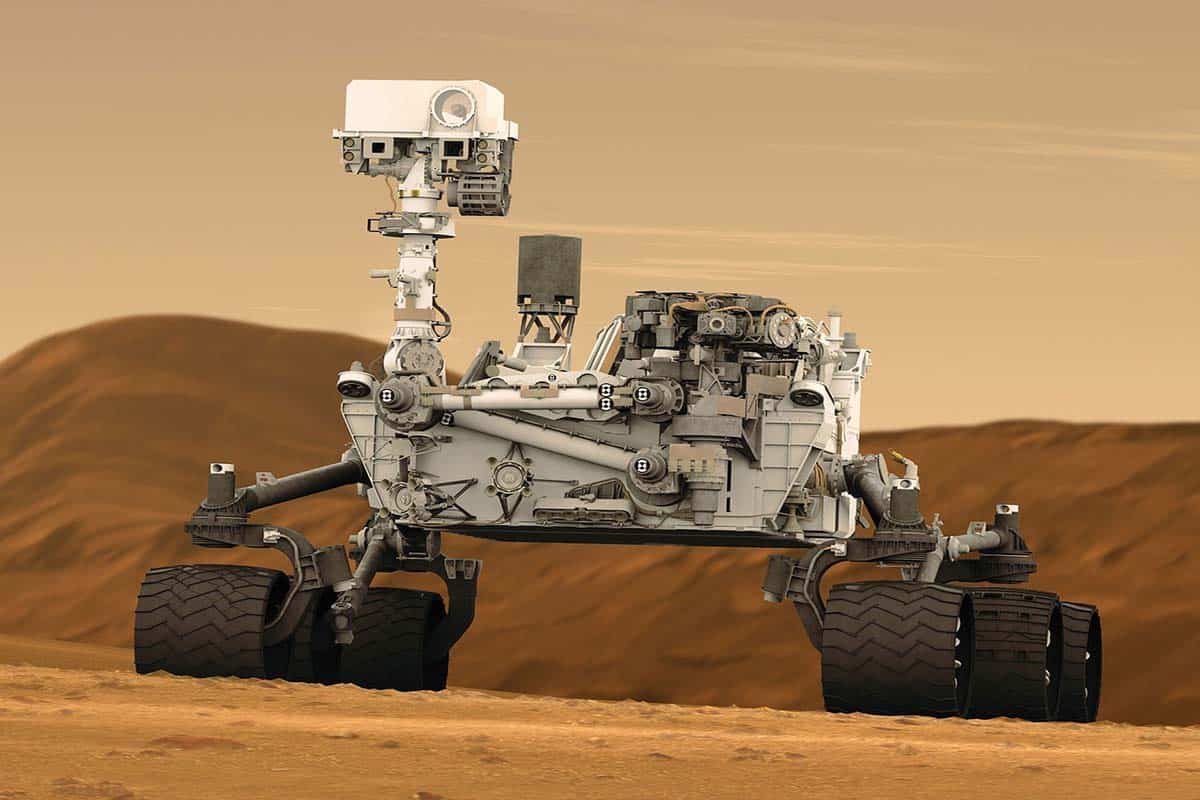 On the sixth day of august 2012, after it had traveled for about six months, the NASA rover curiosity finally docked at her new base on Mars. With over seven years since it touched down Mars having gone by, there is certainly a lot to celebrate about it. However, there are also a few questions that require answers. With the rover living the life of a loner having stayed alone on the gale crater for years. It must, however, note that Curiosity seems to be having a very great time having already exceeded expectations of its timeline on Mars.  The big question of today is “How far has curiosity traveled? “

How far has curiosity traveled?

One of the most notable features of Curiosity is its large size which measures almost the size of a small SUV. It measures about 9 feet and ten inches in length while measuring 9 feet and 1 inch in width with a height of about 7 feet. Also, Curiosity weighs about 900 kilograms with wheels of about 20-inches.

The Curiosity rover was designed in such a way as to surmount obstacles as high as 65 centimeters and travel as much as 200 meters each day. Curiosity gets its power via a radioisotope thermoelectric generator which can generate electricity via heat derived from plutonium-238.

What Is The Mandate Of Curiosity?

It is on record that there are four cardinal objectives of Curiosity’s mission and they include determining if there was ever life on Mars. Also, it is mandated to unravel and characterize the planet’s geology, understand the inherent climate and lay the groundwork for possible human exploration.

It is however imperative to note that these goals are closely related. A pointer to this is the fact that having a better understanding of the climate in mars should help humans ascertain if human beings will be able to explore its surface safely. Also, understanding the Geology of planet Mars should be able to assist scientists to discover if the area close to where Curiosity landed can be inhabited.

What Are The Features That Have Helped Curiosity In Its Mission Thus Far?

Curiosity is equipped with several instruments designed to help it scientifically understand the environment. Some of this equipment includes cameras that can capture the landscape and possible minerals.

Furthermore, it is equipped with Spectrometers that are designed to assist it to understand the overall composition of the minerals that are on Mars.  In addition to these, it also comes equipped with Radiation detectors that are designed to assist it in getting a feel of the radiation levels on the surface of the planet. It also possesses environmental sensors that help it determine the inherent weather in addition to an atmospheric sensor.

How Far Has Curiosity Traveled In Finding Life?

Curiosity is well equipped with several tools designed to help it in its search for life on Mars. One such unique tools are the experiment which helps in bombarding the surface using neutrons which would ordinarily slow down if they were to encounter hydrogen atoms which is one of the core elements of H2O.

Furthermore, its 7 feet arm is designed to be able to take up certain samples from Mars’s surface while cooking them inside of the rover. It then sniffs the gases that evolve from it while also analyzing them to detect clues as regards how the soil and rocks were formed.  In addition to this, Curiosity is also able to drill into blocks while transferring samples gotten into the oven so it can measure the composition. The research will then be carried out to ascertain if organics shows which were not supposed to appear in the block.

Curiosity also comes equipped with high-resolution cameras that surround the rover as it takes pictures in motion. This, in turn, gives us visual information which can be analyzed and compared with earth.

Has Our Curiosity To Find Life Been Satisfied By Curiosity

The core mandate of Curiosity on Mars is to help us ascertain if there is the existence of life and the possibility of man inhabiting its surface. Although Curiosity is not created to locate life in itself, it comes equipped with several instruments that can help gather information regarding its immediate environment.

Back in 2013, there was something close to a breakthrough with scientists finding some evidence that there may have been living on the planet in times past. The samples gotten from Rover’s first drill indicated the presence of certain elements such as hydrogen, sulfur, nitrogen, phosphorus, and carbon which are all likened to fundamental elements that could assist its support life.

What Has Curiosity Found Out About The Environment?

Aside from searching for how habitable life is on planet Mars, Curiosity is also equipped with several types of equipment that are created to help it discover more about its environment. One such objective is to have an ongoing record of radiation and weather observations to ascertain how suitable it would be for subsequent human probes.

Its Radiation assessment detector is designed to run function for about 15 minutes each hour to measure the inherent radiation in the ground. Of particular interest to scientists are rays which can generate lower energy particles after it must have touched the gas molecules in the atmosphere.

What Are The Major Discoveries By Curiosity?

To a large extent, Curiosity has been doing a pretty good job as far as exploring Mars is concerned. Here are a few of such important milestones:

Back then when the idea of water on Mars came up, it was indeed a big deal! However, with time it has become normal information. Curiosity first discovered what was discovered to be a dried-up stream bed.  This discovery was closely followed by another one that indicated that the crater used to be a large lake. There have been supporting discoveries by other rovers in this regard.

At the initial stage of its Mars adventure, Curiosity discovered that Mars could have once been home to Microbial life. In some of the samples drilled elements such as oxygen, sulfur, nitrogen, carbon, and phosphorus were discovered. Add this to the once wet Martian environment; you will discover that Mars may be quite inhabitable.

The discovery of Boron was first made by Curiosity. The discovery of Boron is a very exciting one because Boron was left there by a process of evaporation which means it must have been dissolved in water.  It is also presumed that the water must have been between a temperature of 0 to 60 degrees Celsius which is a temperature that is suitable for life.

What Does The Future Hold For Curiosity

On record, curiosity is not the only rover operating on planet Mars as it is accompanied by some other spacecraft from other parts of the world. For instance, NASA’s Mars Reconnaissance Orbiter gives high-resolution imagery while on the surface. There is also the MAVEN which is tasked with the responsibility of checking the atmosphere of Mars to ascertain phenomena of interest. There are other orbiting missions such as Mars Express, Mars Orbiting Mission from India and ExoMars Trace Gas Orbiter.

Beginning in 2018, Curiosity has been working in partnership with’ Opportunity’ has been on Mars since 2004. The opportunity was initially created for a 3 months mission but has since gone to record 14 years of active service on Mars. It has also been able to detect evidence of water while it explored the two larger craters and plains.

As for the future, more space missions are being expected with the ExoMars rover expected to dock on Mars in 2020 to unravel ancient life. Also, a successor mission by NASA is known as Mars2020 is expected to serve as a replacement.  There is also the prospect of NASA sending humans to Mars in the not too distant future. The year 2030 is muted as a possible time frame, even though Donald Trump as tasked NASA with landing man on the moon again before that time.

Can I Get A Virus From Opening An Email?

Does Huawei Work With Verizon?

How Long Would It Take To Defeat North Korea?

Simple And Effective Driving Tips That Will Help You Avoid The Most Common Road...

The Influence Of Technology On Student Writing Skills