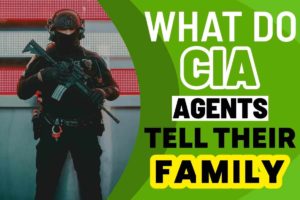 The lives of CIA agents have a lot of mystery and misunderstandings surrounding them. This is partly because of the job itself and also due to how movies and films have shaped our perception of this job.

Do family members of the CIA agent know what they do? In this article, we’ll provide some insight into this and clear out some confusion.

What Do CIA Agents Tell Their Family Members?

If you want a simple answer to this question, it is that at best, agents tell their family members that they work for the CIA. Some lines of work for agents do allow them the ability to reveal their geographical location to their closed ones.

However, sometimes it’s not as simple as that, and information may be restricted. Why is this the case? There are a few things to consider.

What Does The Work Of A CIA Agent Entail?

Despite what Hollywood movies would have you think, being a CIA agent isn’t really about sneaking into an enemy base and getting into fights. Rather, the real scenario is much tamer and seemingly boring at a glance.

Most agents have the task of gathering foreign information from various areas. They also need to analyze this information and report to top US government officials.

So most agents are simply a mediator and a means by which the government gets vital intelligence. The means of this information gathering can differ for many reasons, with some involving setting up a fake alias or identity.

Of course, the nature of the work and the information being exchanged are very important in deciding how much agents can tell their family or even if they are allowed to share any information at all.

Some tasks can cause an agent to relocate to other areas, and in those cases, they might have to make up a story or reason for this change to their spouse.

Depending on the agent’s position in the agency, some need to keep every bit of detail about their work a secret from any outside people to prevent leaks. There are cases of agents lying about their work to their families.

Is Keeping The Details Secret A Part Of The Job?

It is mostly in the contract and details of the job. CIA agents are generally not allowed to reveal details of their jobs as per their contract.

They can tell their spouse or loved ones that they work for the CIA, but further inquiries into their job details are prohibited, and the agents are not allowed to divulge what they did at work.

Job titles can be shared, and for some lines of the work, you can list your geographical area but not the exact area at which you work. Some CIA agents keep their job a secret out of a personal desire.

Due to how most people see and think how dangerous their line of work, agents will often withhold the fact that they work for the CIA so that their family or spouse doesn’t worry.

However, if families want to know about the agent in question, they can contact the CIA. The CIA will not reveal any details about them and only serves as a mediator or just help them get in touch.

Are Their Spouses In The Know?

One of the important questions about CIA agents is whether they’re allowed to have married lives or not. Yes, they can marry and have a married life while continuing their job. The same rules for family members do apply for them as they are not allowed to disclose details of their job to their spouses.

If a CIA agent becomes involved with a foreign resident during their work abroad, the individual must pass both a background and polygraph test before even telling that they work for the CIA.

This is to prevent vital information from leaking. Due to the complications involved, this is an extremely long-winded and taxing process for both parties.

1. Is Being A CIA Agent Dangerous?

Most of the time, there is not much danger involved. Their tasks are not action-filled and mostly involve surveying areas and gathering intel. However, a lot of CIA agents will spend most of their time abroad.

2. What Do CIA Agents Major In?

It depends. There are a variety of Major choices, with some of the top picks being forensics and cybersecurity. Agents have different lines of work, and your work will be determined based on what you got your bachelor’s degree in.

Yes. The CIA has access to more resources than the FBI and gathers intelligence all over the world and thus has a grander scope than the FBI.

4. How Are CIA Agents Recruited?

CIA agents must pass the requirements, either their PT program or CST program. After passing the test, they will go through a background check and will be notified of their results.

What Does Balls Dropped Mean?