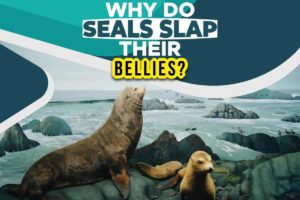 Sea lions and Walruses all belong to the Pinniped branch of the animal kingdom. Ever heard the term Pinnipeds? Well, how about Seals? Yes, your guess is on target! The more formal and scientific names of seals are Pinnipeds. And these semi-marine mammals are pretty intriguing.

Zoologists, ethologists, and several other scientists and researchers have spent years studying these charming and lucrative creatures. You see, these animals are responsible for maintaining the marine ecosystem and food chain.

Anyways, one of the trademark seal gestures is belly slapping. So, why do seals slap their bellies?

Well, they slap their bellies to warn other seals through low-frequency sound waves.

Let us find out more about this and several other things regarding these magnificent and humble creatures.

Why Do Seal Slap Their Bellies?

One thing you probably did not know about seals is that they have very acute hearing. When they are slapping their bellies, they are emitting low-frequency sound waves to other seals as a warning. They do this to ward off trespassing seals. So, they are not being cute, and it would be wise to back off!

More Details On The Belly Slaps!

Even worse, imagine that guy is somehow insulting your authority. Would you not tell the person to back off? Of course, you will! It is an instinct that you would want to protect the people and things you love and care for dearly.

But before you go into fight mode, you would unquestionably warn the person. Now, seals do not come with the ability to speak. So, what can they do? Well, tummy slapping is their way of saying ‘Back-off my turf,’ or ‘This is my mate. You should not go near her in any way.’

It’s like sumo wrestling. Whenever they are fighting, this variant of wrestlers will perform Donskoi, which is like a warning. In this case, the belly slapping is their variation of Donskoi. By the way, though, seals are one of the friendliest mammals in the kingdom. When they are protecting their area or mate, they go all out!

When Can A Seal Get Aggressive Towards Humans?

Seals are said to have the same intelligence and friendliness as your dogs. Apparently, they are also called the dogs of the sea. And, if you think about it, they look the most similar to a dog. In Any Case, even dogs will retaliate if they feel threatened.

So, wild seals will do the same, and if you see them whack their tummy, get away! But here, we shall be talking about the things that you can do to avoid such confrontations.

1. Do not corner the animal

No one likes to feel trapped, and the same goes for seals. If it feels that it is being enclosed and has no way of escaping, then it might get aggressive.

Nothing agitates a Seal more than it is losing a meal. And if you are the reason for that, then it might come at you for that.

Seals are very protective towards their offspring. So, avoid getting in between a Seal and its pups.

Two Seals fighting can be very gruesome. And, if you come in between their fight, they will see you as the enemy. Thus, don’t give them that reason for attacking.

What Other Mammal Uses This Method To Communicate?

Well, if you thought seals slapping their tummies were just for your affection, then you are greatly mistaken, my friend. Apart from seals, there are numerous other aquatic & semi-aquatic animals that showcase similar gestures to converse with one another. Whales are good examples!

You must have seen whales slapping the water surface with immense strength, splashing gallons of water. For you, it might be a total spectacle. However, our wise and welcoming giant mammal friends use this to talk to other whales at a long distance.

The Humpback whales move in packs. Also, these behemoths are migratory animals, which means they would take their group from corners of the Earth to the other in search of more suitable breeding and habitable areas. So, when they are there on the move, it is very probable that they would come across other packs.

Now, whales have a massive territory, and no other whale can enter their territory. Hence, these mammals have designed an ingenious way of warning their big rivals. Similar to seals, whales also have A-grade hearing capabilities.

When the pack is too near, they slap on the water and create smaller splashes, but the frequency becomes more vigorous. On the other hand, when they are far away, the slaps tend to be more brute. By the way, this process has a name. It is called lobtail, and it varies from species to species.

For instance, a Humpback whale would do this repeatedly. At the same time, others might use a different method. Anyways, apart from the warning, whales whack the water surface for display of power as well. Whales are also suggested to use these slaps to show that they are good mates. It is so easy for them to flirt!

1. Can Seal be dangerous?

Of course, they can be dangerous! You see, seals are wild animals at the end of the day. A wild seal is not like the ones in your Disney land. If a wild Seal feels threatened, then he/she will attack. So, it would be wise before you engage in anything regarding these mammals.

Well, it is not easy but not impossible as well. You see, unlike human’s best friend, the Dog. Seals did not undergo generations of training for them to be domesticated. However, after a lot of training, affection, and care, you can tame the beast. Many zoos and aquariums seem to have got them under control.

Yes, they are! In the animal kingdom, they are one of the most intelligent creatures. Apart from being smart, they are very curious and protective. A Seal will come in front of humans and interact with them. Furthermore, there was a reporting saying that a seal saved a drowning dog.

Now, why do seals slap their bellies? It was not to get your affection nor attention. Generally, it is a warning to stay away from their space as well as a warning to come around their mates. However, the ones in the zoos and aquariums are a little different. They were trained to do that for your entertainment.

Therefore, be aware! If you see a Seal showcase such a thing in the wild, it would be the wisest to slowly move away before the animal feels further threatened.

What Is The Fine For Fishing Without A License?

Maine’s Most Essential Foods: Made In An Instant Pot

Who Can You Send Rude Valentine’s Cards To?

Monero Coin: Giving Bitcoin A Run For Its Money