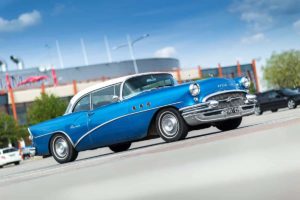 Car manufacturing has come a long way over the years. Brands have developed new features to stay ahead of the competition and motivate the public to keep buying more recent models. Like climate control and ABS are so great that it’s difficult to imagine a time without them.

Even though vintage cars don’t have these modern improvements, they have some perks. For car enthusiasts, the perks even outweigh the downsides. For these people, vintage cars are much better than anything Volvo or Toyota could ever create. Let’s look at some of the reasons why vintage cars are so great.

Vintage Cars Have A Lighter Build

Modern cars have developed to include more features, heavier frames, and more cumbersome. The benefit of vintage cars is that you get none of these limitations. The cars are as simple as they are gorgeous.

Even though they trade off their lightweight build for some functionality, it’s worth it for many car enthusiasts who prefer the aerodynamics and compact bodies of the older models.

Vintage Cars Give You The Full Driving Experience

Older cars don’t have any modern features like traction control, assisted braking, and other driving assists. While they have their place in improving driver safety and road mastery, these technological upgrades can also diminish your riding pleasure. With vintage cars, you are in absolute control of everything, from steering to braking.

Vintage cars also lack the onboard computers that limit your ability to perform complicated maneuvers like drifting and power shifting. If you love to drive and look forward to every aspect, you’re better off with a vintage car.

Not many cars get the attention that vintage vehicles do. And thanks to blockbuster racing moves like Fast and Furious, classic cars are even more attractive these days. They represent class, distinction, and a certain uniqueness that most people crave.

You’ll need a supercar to get as many people to pay attention. And unfortunately, not just any supercar will do it because some are more common than others. For example, a 1967 Shelby gt-500 on revology costs less than a used 2019 Lamborghini Aventador. The Aventador is also more common than the Shelby, making it less impressive. If attention is what you seek, you can’t go wrong with a vintage vehicle.

If you’ve ever attended a tactical driving course, you’ll know that they only use classic cars — the older, the better. If an older vehicle isn’t available, they would rip out all the electronic driving controls and try to get the car as close to a classic car as possible.

The reason behind this is simple — classic cars make you a better driver. The driving experience is pure and unfiltered, and you feel everything the car does. Additionally, you tend to pay more attention because you know there are no electronic training wheels. When driving a vintage car, you figure out everything from the braking threshold to the right amount of steering.

Most cars begin to lose value the moment you drive them off the lot. The higher the mileage, the lower the value. This depreciation is even worse for expensive supercars. Vintage cars are entirely different. The older and rarer it gets, the more valuable it becomes.

This isn’t true for all vintage vehicles — some are collectibles and are thus, more valuable than others. If you occasionally drive your classic car, the value will also go down. That’s because vintage cars are prone to more significant wear and tear than modern vehicles. Finally, your vintage vehicle may end up being utterly worthless if you can’t find a buyer.

Some Classic Cars Are Fuel Economic

This may sound unbelievable because when people think of vintage vehicles, they think of Vin Diesel’s petrol-guzzling charger. And for the most part, it’s true — some vintage cars have large and uneconomical engines that burn ridiculous amounts of fuel.

But other ones, like the Mini Ford Popular, have small engines that can give modern cars like the Ford Focus a run for its money. And since most classic cars are only designed for short trips, you’ll end up spending a small amount on gasoline anyway.

Vintage Cars Have Their Downsides Too

This post wouldn’t be complete if we didn’t also evaluate the complications that came with owning a vintage car.

Any vintage car owner will tell you that they can be a real hassle to maintain. For example, you’ll have to find non-ethanol-based gasoline because ethanol attracts moisture, damaging the car’s tank.

It’s also essential to change the oil frequently — more frequently than with a modern car. Classic cars were built in a different era using outdated technology. You also can’t have the vehicle in one spot for prolonged periods because some parts can break down just by being in a one place.

The good news is that you can do most of the maintenance on your own. Vintage cars were built to be so easy to fix that you don’t need a mechanic. Therefore, you’ll spend less cash on mechanics.

They have an enormous carbon footprint

When most people think of classic cars, they picture a loud vehicle with a powerful engine. But what they don’t often picture are the carbon monoxide emissions that accompany these large engines. Modern cars have much lower emissions.

To be fair, classic cars were created when global warming and air pollution weren’t a concern. We didn’t know much about the effects.

Even though the lack of safety features can create a better driving experience, this isn’t always a good thing. Vintage cars don’t have the advanced safety technology that modern vehicles have, like collision avoidance, braking assists, and anti-lock brakes.

Older models also lack airbags and sometimes seatbelts. These deficiencies make them dangerous for drivers and other road users. It’s possible to upgrade the car by installing additional features, but these will end up costing a lot of money. Plus, they may reduce the car’s overall value.

The Guide To Deciding Between Linux Vs. Windows Hosting

The Fundamentals Of Data Modeling

What Is The Future Of Maine’s High-Tech Business Environment?

Artificial Intelligence And Automation: How The Legal Sector Is Utilizing New Technology