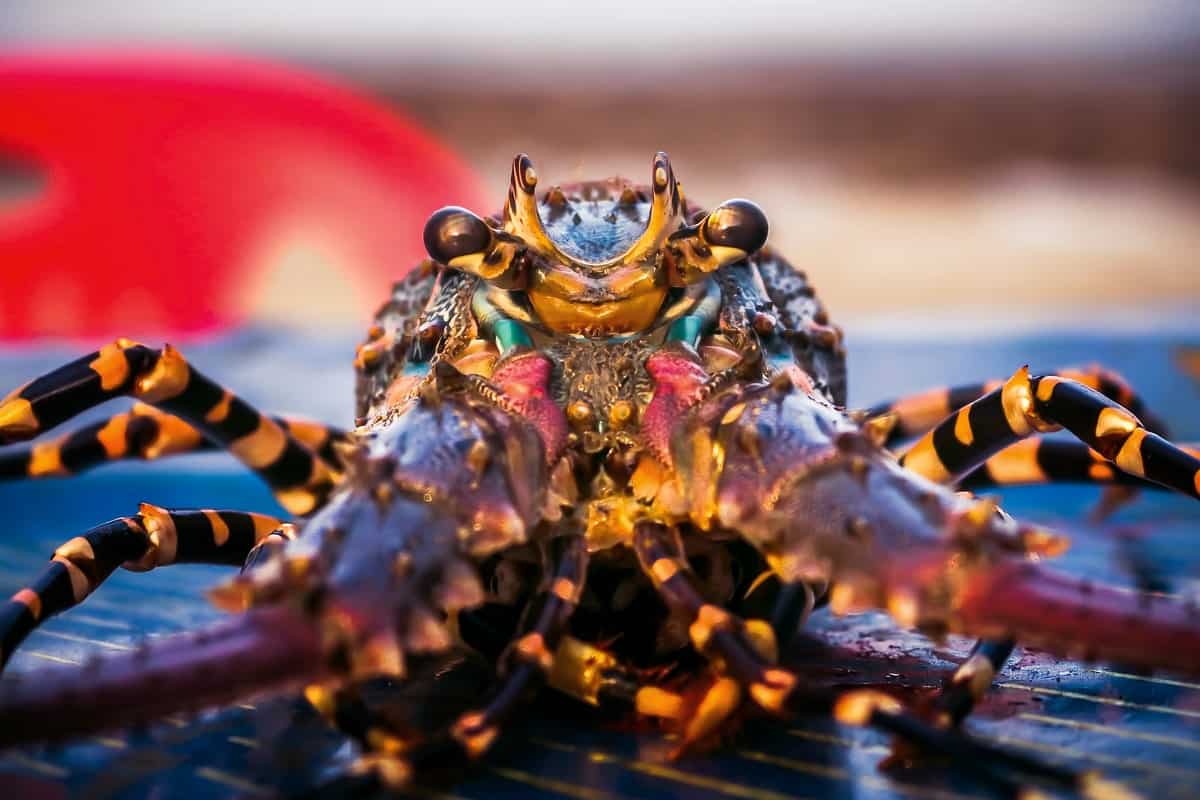 Humans are not the only species that interact with their kind. Lobsters and other animal species do, too.

This post will look at how lobsters interact, including other related information you need to know.

First and foremost, let’s find the answer to this crucial question.

How do lobsters communicate with each other?

So lobsters pee on each other’s faces when communicating. They lack vocal cords, which other animals use to make sounds for communication. Therefore, they don’t scream or make any gesture as a way of communicating.

How Lobsters Squirt Pee When Communicating

We have mentioned the unique way lobsters interact. Now, how do they manage to squirt pee?

Examine a lobster, particularly the head region. You’ll find two bladders on both sides of their heads. Under each eye, you’ll find a tiny urine release nozzle. That’s where they release the substance on each other’s faces when communicating.

What substance does lobsters’ squirt pee release from the nozzle contains? Lobsters’ squirted urine is a chemical messenger and not just any urine.

This chemical enables the animal to communicate several things. These include recognition, attraction, and even aggression.

Lobsters belong to the phylum Arthropoda. They are ten-legged large, bottom-dwelling marine crustaceans, closely related to crabs and shrimps.

Lobsters flourish in cold and rocky waters, making North America’s northeastern coast a favorite destination. But you can find these creatures throughout the world’s ocean, including freshwater and brackish environments.

Most of the lobsters are from North America, precisely the northeastern coast. Maine and the Atlantic provinces of Canada have the world’s largest lobster producers.

Lobsters are highly nutritious, delicious, and consumed worldwide. Native Americans eat and use them for other purposes such as fertilizing crops and as baits.

There are myths that lobsters fall in love and mate for life. Some sources even claim that lobsters hold hands and the males are promiscuous.

While some of these claims are true, most aren’t. For example, lobsters don’t mate for life. Instead, they maintain a monogamous bond, which only lasts for just two weeks.

What happens is this. Male lobsters guard the females for two weeks. And during this period, female lobsters have to shed their exoskeletons, while males deposit sperm packets straight into their abdomen.

Once deposited in the female lobsters’ abdomen, sperm can remain there for up to 15 months until the females are ready to release the roe (eggs).

A Handy Tip: It’s against Maine’s state law to catch and keep a lobster with eggs. Such lobsters must be v-notched and sent back to the ocean.

How Long It Takes For Lobsters To Reach Legal Harvesting Size

The life of a young lobster (baby) starts from the egg. The female lobster first has to determine when and where it is safe to release her eggs. Otherwise, she might lose everything.

Lobster eggs are buoyant. Therefore, if not released in the appropriate place, the eggs could get eaten by fishes. So, only 10 percent of total eggs released by female lobsters make it to adulthood. Some end up as meals to other aquatic animals like fishes.

The eggs remain under the female lobster’s tail for months until she finds the proper place to release them.

How do baby lobsters look? Lobster young (baby) resembles larvae upon hatching. But after molting up to four times, they begin to resemble adult lobsters.

It takes 6 to 8 years for a lobster to reach legal harvesting size or start reproducing. And during this stage, it would have molted for additional twenty times.

A Handy Tip: A lobster’s eggs become fertilized after passing the stored sperm in the female’s abdomen.

Lobsters’ length and size also make the crustacean unique. They get to 4 feet in length and weigh 40 pounds.

Again, the older a lobster gets, the longer and heavier it might become.

There are many shocking facts about lobsters many people might not know. So we took the liberty of putting them together for your reading pleasure.

1. You can differentiate male from female lobsters easily:

Male and female lobsters have some noticeable differences. One of them is the nature of their tails.

Contrary to males, female lobsters have a longer tail. And the reason for this extra space is to give them enough room for the eggs.

2. Lobsters and houseflies have something in common:

What lobsters and houseflies have in common is how they taste. These two creatures taste with their legs. They boast tiny chemosensory hairs on their feet and leg, which helps them to identify food.

Lobsters also use the tiny antennae located in front of their eyes to track down foods situated far away.

3. Lobsters have an extraordinarily long lifespan:

Do you know that lobsters can live for over 100 years? Some also live longer than others. For example, Homarus americanus, an American lobster, can live for more than 100 years. But Panulirus Argus, the Caribbean spiny lobster, might not even live up to 20 years.

A live lobster dies the moment it dries out. And once dead, it can stay fresh for 24 to 48 hours. During this period, you must endeavor to cook the dead lobster. Any further delay and your lobster will no longer be fresh.

5. Lobsters eat a variety of foods, including lobsters:

In the past, people claimed that lobsters were primarily scavengers and consumed dead things. But researchers have been able to debunk these claims.

Female lobsters mate after they have shed their shell. And right after that, they tend to consume their vacated shells, replenishing lost calcium to hasten new shell hardening.

It takes 14 to 30 days from when the lobster vacates the old shell for the new one to toughen up.

Lobsters have powerful claws that can exert pressure that’s approximately 100 lbs per square inch. So, these crustaceans can inflict some severe pain when their claws land on one’s flesh. A large lobster can even break one’s finger with its strong claws.

The tails and claws are two parts of lobsters you can’t eat. Why? The claws are super strong, while the tail is more fibrous and muscular.

You will find edible meat in the body and head. There’s also enough rib meat between the thin shells of a lobster’s body.

9. Lobsters have teeth, but they’re not located in the head:

Lobsters have teeth, together with their claws for crushing things. But their teeth aren’t in their mouth, as many people would expect.

Lobsters’ teeth are in their stomach. Their belly is also a short distance from their mouth. So food consumed gets chewed in the crustacean’s stomach.

A male lobster is also known as a cock, while the female is called a chicken or a hen.

So, how do lobsters communicate? We have carefully answered this question. Lobsters interact by peeing at each other’s faces. The chemical substance released enables them to understand the message each is trying to pass.

Communication is a form of life. And every animal species communicates differently. Lobsters lack vocal cords, and they don’t make any gestures. What they do is pee on each other’s faces, and that’s enough.

Why Do Seals Slap Their Bellies?

Can Hamsters Drink Out Of A Bowl?

Types Of Birth Injuries To Keep An Eye Out For

Can You Put Toner On Wet Hair?