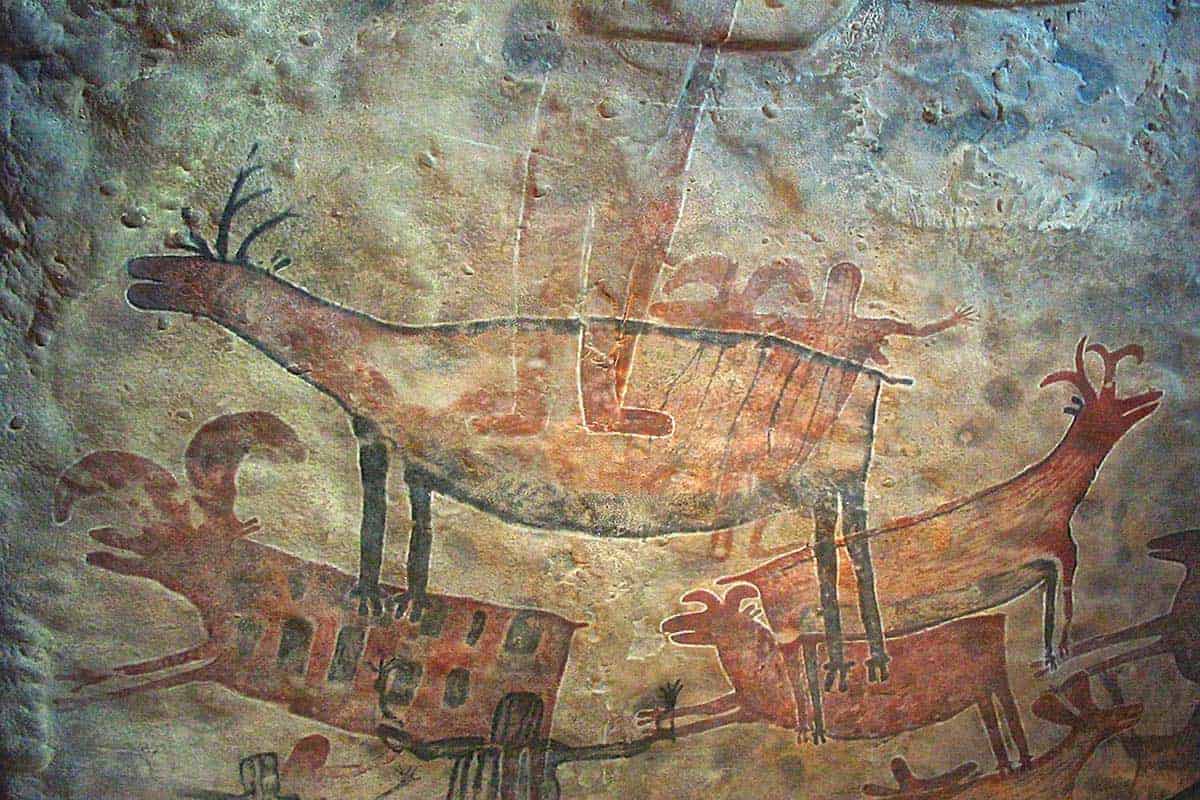 The first-ever cave paintings to be discovered were found by Don Marcelino and his daughter back in 1870. It is assumed that they were painted by the Magdalenian people between 16,000-9,000 BC which is between 11,000 to 19,000 years ago. The paintings were mainly of the bison and a number of them are using the boulders for the shoulders of animals. This is the reason why they look three dimensional. It should be noted that humans had not yet learned how to write during pre-historic times and as such relied on cave paintings for communication. But then, why exactly did the man find a reason to paint on the walls of caves.

Three possible theories could support why man painted in caves. First is the possibility that they wanted to decorate their caves, the second could be that they viewed it as magic which could help the hunters out and finally, they could have been used to serve as documentation for their hunting expeditions. Here is a look at the possible purpose of cave hunting.

What is the purpose of cave painting?

There are some reasonable theories for this. Let’s first look at the paintings and drawings of animals. Quite a number of them are so gracefully done that it can be assumed that the artist behind it did nothing but practice drawing and draw. It should be noted that these caves are scattered all over Europe, hence it suffices to say that the artists are different from one another. In addition to this is the fact that in most of the caves, the paintings were executed over a long period and usually involved more than one artist.

There are quite a several reasons why these animals were painted, chief among them were for worship and admiration. Also, some were done for magic and this happens when they make the painting of a very strong beast and then the humans pick up their strength for fighting or hunting. Finally, it is believed that they do so to appreciate herd instincts. In summary, cave paintings tell us how cultural and intelligent the inhabitants of caves were,

What Are The Cave Paintings?

These are a type of parietal art that is found on ceilings or walls of caves. They are usually of prehistoric origin even though there are recent productions of the same. For instance, the oldest painting Gabarnmug in the northern part of Australia dates back to 28,000 years ago while the most recent painting in the same cave dates back to less than a century ago.

There are chances that when you think about art, the image that readily comes to your mind is that of an artist at a display gallery or something of that nature. However, before the existence of such forms of art, humans were still known to express their artistic tendencies on walls. Here is a breakdown of some of the oldest cave arts known in the world.

This cave is one of the oldest known forms of the prehistoric art form with a core focus on ochre a kind of iron-rich mineral. Inside this cave, over 8,000 pieces of ochre material were discovered which all dated back to the Middle Stone Age. Aside from the fact that they appeared to have been deliberately shaped for certain purposes, some of these ochre pieces were engraved using abstract designs in quite complex forms.  The most famous of these were two ochre pieces found in 2002 which had well engraved cross-hatched designs as well as other unique features in them. These engravings are the oldest known forms of conventional and abstract design tradition. Six other such geometrically shaped ochre works were discovered back in 2009. Also, a processing workshop for the ochre was found in areas dating back to 100,000 years old back in 2008.

Before paintings came, there were engravings. Diepkloof Rock Shelter was a place where about 270 container fragments made from the eggshells of ostrich were discovered. It is estimated that they were originally from 25 water containers. These eggshells were discovered to have engravings of a certain geometric pattern and some abstract linear patterns that are known to repeat across some of the segments.  It is assumed that this is a way of representing the owners of each container.

Also, the patterns and similarities found across the eggshells indicate that there were certain rules used for composing the designs and patterns. It should also be noted that as a result of the hardness and texture of the ostrich eggshells, such engravings couldn’t have been so easy to make.

Located in Sulawesi Indonesia, this 40,000 years old cave was only discovered recently. The cave paintings contained here range in periods with several eras of craft found on its walls. The cave art on this cave was originally thought to be just 12,000 years old. However, recent studies have proven otherwise. The cave is home to the oldest known animal cave painting in the world which dates back to 35,400 years old.

Aside from the figurative and animal etchings, the Timpuseng cave is also home to some of the oldest discovered painting in the world generally.

Aged 37,000 years old and located in France, this is perhaps the most important prehistoric site on earth due to its collection of the best-preserved cave paintings in the world. It was initially explored by three speleologists one of whom was Jean-Marie Chauvert after whom the cave was named.

The age of the paintings in the cave has been an issue of dispute over the years ever since it was discovered back in 1994. Research, however, shows that there were two distinct periods of creation. The first occurred between 37,000 and 33,500 years ago. The second took place between 31,000 and 28,000 years ago. Contained in the cave are several dozens of animal paintings of over a dozen species of animals both predatory and herbivorous which were not found in other cave arts as at that time. There is also a painting of a volcano erupting which is on record to be the oldest known depiction of a volcanic eruption.

Dating back to 35,000 years, the Colibaoia cave is located in Romania. It is believed that the Gravettian and Aurignacian cultures may be chiefly responsible for the art contained in the cave. The most popular painting contained within the cave is the bison head drawings located on the right wall of the Art Gallery as well as a rhinoceros head drawing located at the left.

The art gallery contained within the cave measures about seven meters above the ground with most of the paintings on the ceilings. The paintings here are mainly of animal heads done in black charcoal. The first discovery of the cave was back in 1900 even though it was only fully investigated in 1981. The paintings were however only discovered in 2009 after which it was designated as a protected territory by the Romanian government.

About 350 caves have so far been discovered in Spain and France which contain one form or the other of prehistoric evidence. The age of such paintings has been an issue of contention over some time because radiocarbon dating information can be quite misleading.  This is especially if it is contaminated by newer or older materials. The earliest known figurative cave paintings are located in France. Cave paintings have also been discovered in Australia on the Arnhem Land plateau which indicates megafauna which is thought to have gone into extinction over 40,000 years ago.

Man has always been a lover of arts in different forms. The purpose of cave painting as explained in this piece depicts why man has always loved the arts. From all indications, discoveries will still be made regarding some of the hidden treasures of art scattered all over the world. But for now, we will keep celebrating the ones already found.

How Can We Stand Together To Beat Coronavirus