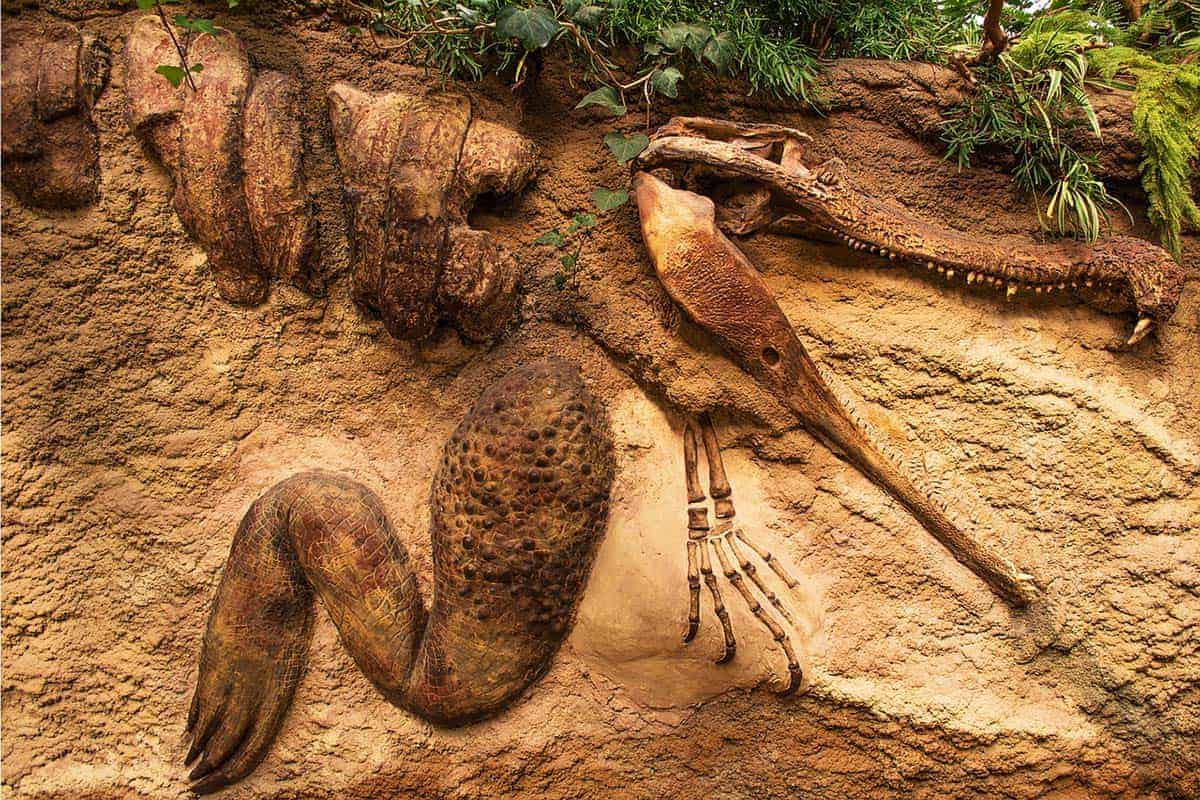 The three main types of rocks we have are igneous, sedimentary, and metamorphic rock. But despite having three different rocks, why are fossils found in sedimentary rocks? That is one mind-bogging question most people would be asking.

Here is the answer to the question:

Continue reading to know more regarding sedimentary rock and fossils!

Sedimentary Rocks: How They Are Categorized

Before we go into details on how sedimentary rocks are formed, let’s look at the various types that exist.

So these are the various sedimentary rocks we have.

The Clastic rocks are sedimentary rocks that consist of gravel, clay, silt, and sand, which are a product of weathering. They are also cemented together courtesy of weathering products that have dissolved.

However, the Clastic sedimentary rocks are classified based on the grain size of the rock particles. For instance, the clay-sized grains, which are too small to the extent that you cannot see them with the aid of a microscope, are known as shale.

The second sedimentary rock type is the Biogenic. These rocks are formed in a way different from the one we just discussed. They contain materials formed due to the activities of living organisms. And this includes coal and various limestones, composed of the shells or skeletal pieces that belong to marine organisms.

The third of the sedimentary rock types are the chemically precipitated rocks. They comprise of the gypsum, halite, and most limestones that form direct crystallization from ions dissolved in water.

How Sedimentary Rocks Are Formed

The sedimentary rock you see, looking gorgeous, is a product of different processes. And in simple terms, the procedures involved are weathering, transport, deposition, compaction, and cementation.

Now let me explain the process:

Pre-existing rocks are being weathered and transported to where they will become established. Next, material deposition takes place. And after that, there is compaction, and then cementation of the sediments. The cementation is the last step in the sedimentary rock formation process.

Alright, these are the things you need to know about sedimentary rock formation. But I won’t stop here. Let’s dig deeper to understand the process better.

The weathering process is the first step in the formation of sedimentary rock. It’s a process that all rocks; be it metamorphic, sedimentary or igneous, has to go through to become what we see as a rock.

One of the stages is mechanical weathering. Alright, let’s explain what this first stage is.

During the mechanical weathering process, rocks are equally broken down into tiny little pieces by root-wedging, frost-wedging, and abrasion. The first being “root-wedging” is due to the roots of plants that grow into cracks. Furthermore, frost-wedging refers to the thawing and freezing of water in cracks.

Also, one thing you should know about mechanical weathering is that they can break rocks down into tiny little pieces. And I mean smaller pieces. However, they do not alter the minerals. That stays the same.

In this process, keep in mind that some minerals dissolve completely. Examples are the calcite and halite. But other minerals like silicate are altered via a chemical process known as hydrolysis.

The term hydrolysis refers to a reaction that occurs on minerals present in waters, particularly weakly acidic waters.

Another process in a sedimentary rock formation is transportation. And as you know, transport means you are carrying something from one place to another place. There must also be an agent (facilitator) of this process.

The most critical agent of transportation is no other but water. Water moves particles in rivers (Be it the smallest of clay particles or bigger-sized boulders). However, the smaller-sized rock fragments and boulders do not remain the same. The breaking down process continues, and they also experience chemical alteration as they move down the stream.

Water is also involved in the transportation of dissolved minerals. These include silica as well as cations found downstream and even in groundwater. But water is not the only agent that transports particles; the wind also does the same thing.

The wind blows sand, dust, and glaciers. It carries a massive amount of gravel, boulders, smaller-sized particles, including mass wasting residing on hillslopes.

Now here is something you need to know about the transportation of sedimentary material. As the material moves, there is a decrease in the size of the particles. The change in energy exhibited by the transport agent (wind or water), help to sort the particles according to their sizes.

The transport agent, whether wind or water, must have enough energy before it can transport sediments. The energy must be high enough to move particles of varied sizes. A steep mountain stream can carry bigger-sized boulders during periods like the spring flood.

But keep in mind that these boulders won’t move into placid lowland rivers. Instead, the bigger-sized sediment will end up deposited near their primary sources. That is what happens.

Another thing you need to know about sediments is that they deposit one layer upon another. The layers are also being deposited horizontally.

The first thing I will like to point out is the definition of a fossil. With that, we will have a better understanding of the term. Fossils are there as evidence that something (a living thing) existed. It could be either plant or animal, anything that exhibits the characteristics of a living thing!

Fossils can be the tiny little pollen from microscopic plants or as big as a giant dinosaur. And for the records, two types of fossils exist. One of them is the Body fossils, which comprises of the remains of organisms that have died many years ago.

The remains could be the shell, leaves, teeth, or bones of the organism. The second type of fossils is called the Trace fossils.  The Trace fossils comprise of preserved records indicating the activities or presence of organisms, such as dung, burrows, and footprints.

Now Back To The Question, How Are Fossils Formed? 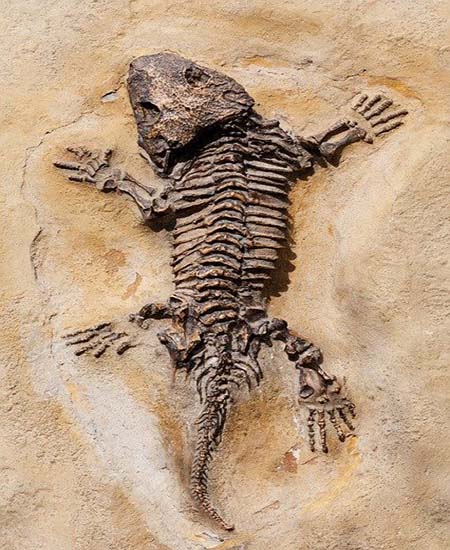 Most living things die and start decaying. You won’t even find any trace of their remains behind. But then, in rare cases, an organism, dead, can finally become fossilized after a while.

You will also find sediments with some animals and plants buried in them. The sediment protects them dead plants and animals from organic decay, scavengers, and or weathering process.

So, once the remains are buried, water transporting dissolved minerals will flow through it, thus leading to their preservation at the cellular level.

Now, one thing you need to understand is that the possibility of the remains of dead plants and animals (living things) turning into fossils is high. That is why we have fossils around the globe.

But there is another thing — the environment in which the remains are deposited plays a vital role in fossil development. The idea is most environments favor the development of fossils than most others.

Fossils In Sedimentary Rocks: How Are Their Ages Determined?

Scientists have found the answers to numerous challenges, and one is the fossils’ ages. There are two ways they can determine this. The first step is via the principles of geology.  A simple explanation is this; when two layers of rock are viewed, it is assumed that the one beneath formed first.

So, scientists believe that fossils in the higher layer are younger than the ones in the lower layer.

Another way that scientists can determine the age of fossils is through radiometric dating. Most rocks do have naturally-occurring radioactive isotopes. These isotopes also change or decay at specific rates.

So, when they compare the abundance of these isotopes, together with their decay products found in the said rock sample, they can tell the number of years that have passed since the formation of that particular rock.

So, now you understand the answer to the question, “Why are fossils found in sedimentary rocks”? It’s a common question because sedimentary rocks aren’t the only rocks out there. Therefore, it is unfair that they are the only ones that can harbor fossils. But anyway, the condition around makes them favorites for the formation of fossils. They are not formed under high pressure and temperature that can damage these fossils.

Bitcoin Wallets – Know The Variety Available In The Market!

Common Things That Home Appraisers Look For During An Appraisal

Did Bill Gates Go To Cornell

Can You Use Regular Nail Polish With UV Light?